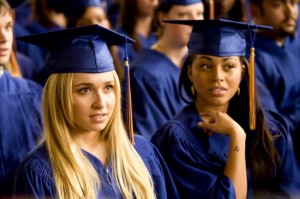 By the time you’ve reviewed hundreds of films, you cannot really write that one is “unbelievably bad” because you can indeed believe how bad a film can be. “I Love You, Beth Cooper” is a high-school comedy where the valedictorian professes his love for the cheerleader at graduation exercises. His sidekick and her sidekicks then party hard for a long night of adventure and revelation. This film is filled with voids, the screen counterpart to “dead air” in radio. Scene after scene sucks whatever life or originality this project ever had and holds it in escrow. Can a film actually sequester creativity like carbon? Hayden Panettiere (“Heroes”) plays über-popular blonde cheerleader “Beth” in the title who’s headed for Harper Community College at best. Paul Rust plays the Stanford-bound pre-med who’s the “I.” That title was penned by novelist and screenwriter Larry Doyle, class of 1976 at Buffalo Grove High School. Chris Columbus, onetime resident of River Forest, directs with even less prowess than he wielded in two “Home Alone”s and two “Harry Potter”s. With Jack T. Carpenter, Lauren London, Lauren Storm, Shawn Roberts, Alan Ruck, Cynthia Stevenson and the director’s daughter Violet in the role of “Sullen Girl.” 101m. (Bill Stamets)