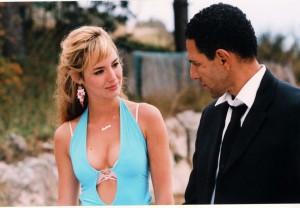 Director Anne Fontaine’s 2003 “Nathalie,” a terrific corkscrew of a sexual thriller is being remade as “Chloe” by Atom Egoyan in what’s been hinted at as an amped-up “Basic Instinct” type of product; her own, soon-to-be-released Audrey Tatou-starring “Coco Before Chanel” is getting good reviews. In the midst of that yield comes a mid-summer release of her “The Girl From Monaco” (2008), with a naughty trailer that slightly misrepresents Fontaine’s tonal ambitions, combining comedy built off a romantic triangle with increasingly serious matters. Fabrice Luchini, a French everyman in movies like Patrice Leconte’s “Inimtate Strangers,” plays a lawyer assigned to a murder case in the principality of Monaco who becomes involved with a much younger TV weathergirl (Louise Bourgoin) who becomes involved with his bodyguard (Roschdy Zem), et cetera. In its lightest moments, it’s entertaining, despite implausible actions by all involved and Bourgoin’s flat performance up against the more precise, enjoyable presences of Zem and Luchini. With Stéphane Audran, Gilles Cohen, Alexandre Steiger, Philippe Duclos, Jeanne Balibar, Hélène de Saint-Père, Christophe Van de Velde. 95m. (Ray Pride)