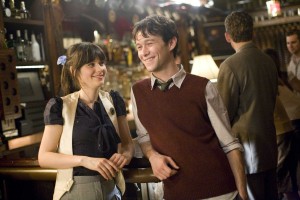 “(500) Days Of Summer” announces its playfulness from its first set of parentheses: this is going to be a knowing, bittersweet, comic examination of one young man’s journey away from misunderstanding women, one romance that might just teach him how to take women out from between them.

Screenwriter Scott Neustadter has written that with one particular woman, he’d found the One, not knowing she was, yes, but she was The One Who Would Wreck His Objectification Of Women, The One He Would Not Only Not Forget But Would Have To Write A Role For Zooey Deschanel About (collaborating with Michael H. Weber). Culinary metaphors in movie reviews are easy to resist, but the tart effervescence of “Summer” is like champagne outdoors in summer, a cool flute of sparkling wine with red ripe raspberries at the bottom. (And the film’s punchline is so perfect it’s wrong, it’s right, it’s ideal.)

Joseph Gordon-Levitt plays Tom, quicksilver with his growing Everyman ordinariness, Everyman handsomeness, an architect by training who’s settled into composing greeting-card homilies. (Isn’t that a neat metaphor for the career of the jobbing screenwriter?) The card shop’s where Tom has the (mis)fortune to pass much of his (500) days around Summer. Yes, of course, Zooey Deschanel, of the not-stoned, not-shellshocked, just huge blue eyes and the endlessly odd comic intonations, plays a girl named Summer. Too cute? She’s an archetype. She oughta be a season: one that comes to end all too quickly, all too suddenly. Webb and the screenwriters litter the movie with all kinds of details like that, from dialogue to decors, from behavior to all kinds of apt musical selections, that are a feather’s gentle breadth away from becoming twee. (The pair’s first meeting comes in an elevator to The Smiths lyric, “And if a double-decker bus crashes into us… to die by your side is such a heavenly way to die.” “You like the Smiths?” “Yeahhhh.”)

I hesitate to utter that word in front of director Marc Webb, but I’m trying to describe how he’s avoided that pitfall. “I hate the word ‘twee.'” The word “twee” itself is very twee. “Yeah. And its usage has become really ‘clever.’ Oh yeah, that’s really clever, you used the word ‘twee.’ Williamsburg hipster vegan-bloggers, whatever,” the affable 30-year-old director jokes. “We actually talked about that word on set quite a bit. I mean, listen, we wanted to play with the tools of the genre, a wise little sister, there’s a scene set at a wedding, there are certain set pieces and constructs that are used because we wanted to take this genre and subvert it in some way. In order to do that, you have to pay homage to it, y’know? All those things were part of it. But we didn’t want it to be ironic, you know what I mean? We’re not trying to be cruel or snarky about it. There’s a genuine affection for what this kind of movie can be. We didn’t have a grand design to reinvent the romantic comedy or anything like that. We just wanted to make a movie the way that we thought we would like to see it.”

Bursting with as many moony ideas as a young man’s brain filled with first love, “Summer” runs the danger of getting classed as one more debut by a director who’s made rock videos. “I have. What can I say? Clearly, if you look at the movie, there’s influence there. Listen, I’ll tell you why people are reacting to it. People genuinely—if you go online, [you’ll find] the right people are touched by it. When you’re doing a music video, it’s very easy to be seduced by a shot, by the microcosmic level of things. This is gonna look cool, so use this. [But with a feature], you try to make global rules. The color palettes, how we covered the movie. It wasn’t about shots. The cinematographer had a really good rule, he said, ‘I don’t want there to be any shots that I can put on my reel, that you can just pull out. I thought that was a really good rule. We just tried to track the emotional continuity of the movie. It’s clearly a subjective thing, and there are a lot of tools that I learned while doing music videos. I’m really happy I had that experience.”

“Pretty girls with rebel hearts are in high demand,” a character says. “Summer” is anti-objectification; Summer is idealized crazily, but what he takes away is, I’m going to be my own person. “Right. And there’s a consequence to that. Some people go into this movie thinking, oh, [this path will lead to this result].” He pauses, smiles. “Yeah.” Pauses again. “That is part of it.” Big grin.