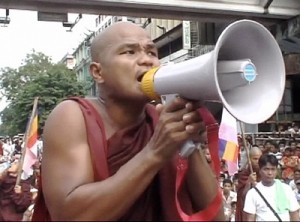 A painful narrative of the 2007 citizen resistance to the Burmese junta, Anders Ostergaard’s much-honored “Burma VJ: Reporting From A Forbidden Country” is marred only by a reliance on slick, recreated scenes. While obviously a necessity both because of the closed borders of Burma and a desire to keep the identity of the guerilla “VJs” (video journalists) who shot and smuggled video out of the country, it tends to lend a “produced” quality out of character with the genuinely compelling and horrifying images of an army killing citizens in the streets with impunity, including ranks of monks. Still, the immediacy of the images caught by the self-endangering, camera-wielding citizenry is enthralling. 84m. DigiBeta video. (Ray Pride)