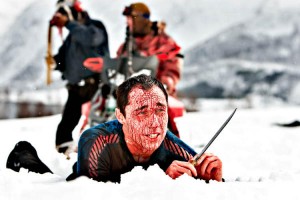 As ice-cold as the title “Dead Snow” is, “Blood Blood” would not be an inaccurate one, either. Tommy Wirkola’s “Død snø” (2009) follows eight generic pre-med students into the arctic reaches of the Norwegian Alps when they’re set upon by Nazi zombie soldiers. Everything you need to know about battling Germanic undead you likely could learn from watching Sam Raimi movies and Peter Jackson pictures, Wirkola would have you believe. The splatter makes gorgeous contrast to the vast expanses of whiteness, but “Dead Snow” is no “Evil Dead” nor “Braindead,” to mention just a couple of splatstick pictures Wirkola works to bring alive from the frame grabs in his brain. Oddly, the zombies are fleet, moving faster than any thought in the munch-fodder cast of characters. Nothing in the movie is quite as clever as the tagline “Ein! Zwei! Die!” With Ane Dahl Torp, Jenny Skavlan, Charlotte Frogner, Bjørn Sundquist, Stig Frode Henriksen, Evy Kasseth Røsten, Vegar Hoel, Jeppe Laursen, Ørjan Gamst, Lasse Valdal and an awful lot of grisly grue and gore. 92m. (Ray Pride)