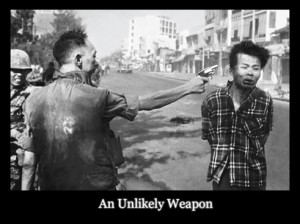 Photographer Eddie Adams covered thirteen wars, shot fashion, a wealth of portraiture, including six presidents, Mother Teresa and Penthouse Pets, but was best known for a photograph of Saigon Police Chief General Nygoc Loan shooting a young Vietcong prisoner on the street point blank in the head. “Saigon Execution” won him the Pulitzer Prize. In “Eddie Adams: An Unlikely Weapon,” Susan Morgan Cooper considers the man against the iconic imagery of his work, a hard-bitten, hard-drinking, profane, self-deprecating, even self-loathing skeptic who says, shrugging, “Nobody gives a damn, we’re all going to die, we’re disposable.” And of the iconic image? “The composition was terrible.” Morgan met Adams at the end of his life, before he abruptly succumbed to Lou Gehrig’s disease in 2004. (There’s a fascinating backstory about an on-the-streets New York interview with the photographer that required meticulous sound preservation from a lo-fi VHS tape.) Despite his gruff perfectionism, Adams did say, “Pictures are a lot more important than a lot of people think. They say the written word? Bullshit. It’s the picture that does it.” Like Adams’ best images, “An Unlikely Weapon” aches with intimacy. This picture does it. Peter Jennings, Tom Brokaw, Morley Safer, Bob Schieffer and photographers Gordon Parks, Nick Ut and Bill Eppridge and are among the interviewees. Kiefer Sutherland narrates. The touching score is by Kyle Eastwood and Michael Stevens. (Ray Pride)