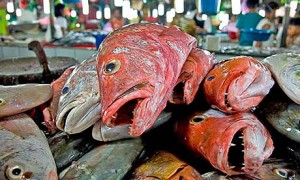 From Rupert Murray, the director of the visually impressive story of an amnesiac “Unknown White Male,” “The End of the Line” is a despairing look at the despoliation of the world’s oceans by overfishing. While the climax of the upcoming “The Cove” is far more incendiary, Murray’s neo-apocalyptic thesis, funded by a number of Oceanic interest groups, is that we’ve passed the point of sustainability. Within a weave of gorgeous underwater photography, just before the main title, Murray inserts close-ups of chopsticks raised to open mouths: nature versus nurture, indeed. (Directly before the main title, a fisherman’s dark hand drips with blood.) Based on a book by London Telegraph journalist Charles Clover that argues we’ll be out of fish by 2048, this piscatorial horror show is more descriptive than prescriptive and for however much Murray’s film sounds a pressing case, it winds up depressing as hell. Ted Danson’s narration bristles. The overdramatic score is by Srdjan Kurpjel and Marios Takoushis. (Ray Pride)