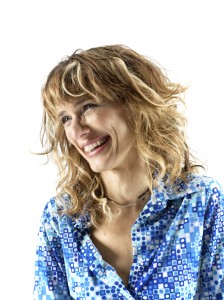 Ben (Mark Duplass, “The Puffy Chair”) and Andrew (Josh Leonard, “The Blair Witch Project”) shared rowdy college years. Ben’s got a wife, Anna (Alycia Delmore), and they’re trying to have a kid. Andrew shows up unbidden and the macho begins anew. The drinking scene with the challenge comes off unforced, true and truly hilarious, fertile with swears and funny observations.

Writer-director Lynn Shelton [pictured] worked together with her performers to create the setup, with long improvisations and long takes once on set. Put simply, Shelton is a woman, a filmmaker who gets guys. The 43-year-old mom’s phrase for what she’s doing is “excessive naturalism” in a question for what defines honesty in all kinds of intimacy and relationships. And it’s at least forty-four times funnier than “Bruno.”

There’s lots of casual swearing, too, unlike movies formulated for specific ratings. These guys sound like… guys who swear. “That’s just how they talk. Yeah. I totally agree,” Shelton says. “I’ve been reading all these scripts suddenly, because people are wanting me to consider directing films. It’s interesting to see how language is used in scripts in a way that it sometimes feels like a shock-value thing. Or throwing in extra dick jokes so that, something they think an audience will get out of it, but it feels so forced. Not organic to the situation. There’s tons of F-bombs in my movie, but I feel like you get the sense, that’s just the way these guys talk.”

They say “fuck” a lot, but when it comes to the challenge they set for each other, they suddenly call it “boning.” The ready-to-laugh Shelton giggles. “It is funny. Or ‘straight-ballin’.’ Mark is very proud of that line.” Their laughter doesn’t seem forced. “I just wanted that throughout the whole thing. I just never wanted it to feel like acting. I really wanted to establish, it’s a very simplistic approach, but wanting to spend a lot of time figuring out who these guys are. The backstory is just unbelievably elaborate and rich and dense. It was all to create the chemistry and the richness and the texture.”

Is it meant to be left off-camera or is it a trove they could draw from while doing the extended on-camera improvisations? “It comes up all the time. They would constantly bring up, ‘Oh remember that time?’ It came up while the cameras were on, all the time. And I always knew I would cut I out. I never wanted that, I was never interested in it. There’s no reason to have it in there! No reason. It’s all there to help the actors, make them feel like they’re genuinely in this situation and there’s this chemistry. I wanted all the backstory to be latent, never to be brought to the surface, or only hinted at. You get a taste of it in the drunk scene with Anna. Of course he went on for ten minutes, telling her the entire story. But the audience doesn’t need it. It doesn’t do anything. I think it’s even more interesting if you can just sense that it’s under the surface. It’s behind their eyes when they’re dealing with each other.”

We talk about multicamera approaches, such as in “Gosford Park” and the TV series, “The Office.” “People come in even if they don’t have a scene that day. They never know when they’re going to be on camera, so they’re always in character, hanging out. I just think that’s so brilliant! Here, there’s usually only two or three people, there’s never those sort of offguard moments, but having those two cameras does mean they’re always on camera. They’re always… in it. They never check out.” On traditional movie sets, she points out, the actor that’s not on camera saves it for their shot. “Here, they have no idea which take is going to be used, so they bring it every time. But if you’re waiting… I don’t think they mean to do that, but it’s just a natural human thing. I was impressed just how incredibly invested my cast was every single moment on the set. I think that comes from the ownership they felt because I invited them into the process early enough to develop the characters with me. It makes them feel like it’s their movie. It’s the same thing for the whole crew, actually, there’s so few people on set, I hope that they all feel valued. It’s their movie as well.

She’s got a copy of David Lynch’s meditation-epigram tome “Catching the Big Fish” poking out of her Quinzaine des realisateurs tote bag (from the Director’s Fortnight, which featured “Humpday”). “Somebody just gave it to me. I like it. I’ve been sort of been meaning to start a meditation practice and I think this is finally going to get me to do it. I get so high-strung and I feel like for my mental health I should be meditating? This one is the one that’s giving me a real motivation: that you’ll be a better artist, you’ll solve creative problems better if you do this. That I can get excited about.”