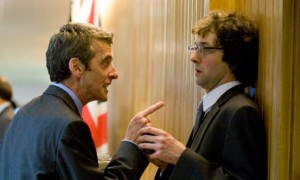 Brit TV director Armando Iannucci (“The Thick of It” and “Alan Partridge” shows) and his co-writers launch a ripping satire of U.K. and U.S. apparatchiks who bumble the allies towards war in the Middle East. Neither “Blair,” “Bush” nor “Bin Laden” are ever named in “In the Loop,” which was shot in London, D.C. and New York City in the spring of 2008. Here the madcap spinning and scheming unfolds at lower echelons of officials with “assistant” in their titles, plus their callow aides and cynical advisers. Simon Foster (Tom Hollander), Minister for International Development, blathers on the radio about diarrhea and the “war against preventable diseases.” When the interviewer segues to war in the Middle East, Foster answers, “Personally, I think that war is unforeseeable.” This pronouncement ricochets through a news cycle, followed by his cryptic: “Britain must be ready to climb the mountain of conflict.” This enrages the Prime Minister’s spinner-in-chief Malcolm Tucker (Peter Capaldi), who rants: “This is a government department, not a fucking Jane fucking Austen novel.” His volley against opera playing in a government office: “It’s just vowels, subsidized foreign fucking vowels.” A U.S. intern pens a briefing paper “Post-War Planning: Parameters, Implications and Possibilities” that gets re-written into “fact-ish intel” on both sides of the Atlantic prior to a United National Security Council vote. In the topical manner of Robert Altman’s “Tanner ’88,” set on the U.S. campaign trail, and Ken Finkleman’s “The Newsroom,” set in a CBC Toronto office, “In the Loop” is a zippy romp through corridors of power by an intelligent ensemble. Listening to Adem Ilhan’s lithe score is worth a sit through the end credits. With Chris Addison, Mimi Kennedy, Gina McKee, James Gandolfini, Anna Chlumsky, David Rasche, Paul Michaelson, Paul Higgins, James Smith, Alex Macqueen, Olivia Poulet and Steve Coogan. 102m. (Bill Stamets)