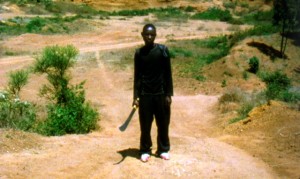 Korean-American filmmaker Lee Isaac Chung’s debut feature “Munyurangabo” (which debuted at Cannes 2007) captures with great ambivalence the fate of the survivor. Two teenagers (Jeff Rutagengwa and Eric Dorunkundiye) become friends in Rwanda, one Hutu, the other Tutsi, while the first seeks revenge for the massacre of his father. Working in a modest, quiet, yet assured neorealist vein, Chung manages to make the slightly rugged edges work for this small, often poetic film (shot in Super 16mm in eleven days). What could have been familiar, violent or patronizing drama becomes touching. I’d like to think the late Ousmane Sembène might have been impressed. 97m. (Ray Pride)