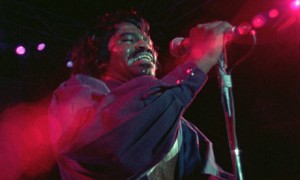 In 1995, Jeffrey Levy-Hinte was hired as editor on Leon Gast’s “When We Were Kings,” the Oscar-wining documentary about “The Rumble in the Jungle” face-off in 1974 between Muhammad Ali and George Foreman. A three-night concert in Kinshasa, Zaire was scheduled as a parallel event, but scheduling troubles meant the expensive R&B super-concert project, dreamt up by Hugh Masekela and Stewart Levine, had to proceed on its own, featuring  James Brown, B. B. King, Bill Withers, Celia Cruz, The Spinners. (Ali and Don King are glimpsed as well, but the story here is told in song and dance.) The wealth of this material remained unseen for years, not even assembled from the many reels of film left behind from “Kings.” Shot vérité-style by great cinematographers Albert Maysles, Paul Goldsmith, Kevin Keating and Roderick Young, the hundreds of camera rolls, seen afresh, often seemed like ten-minute short films in and of themselves, Levy-Hinte told me in Chicago recently. He knew there was something there more than a series of concert DVDs. Levy-Hinte, best known of late as a producer of movies like “Thirteen” and Lisa Cholodenko’s “High Art” and “Laurel Canyon,” Larry Fessenden’s “Wendigo,” and Marina Zenovich’s “Roman Polanski: Wanted and Desired.” The exuberant “Soul Power’ is distributed by Sony Pictures Classics, but Levy-Hinte has been involved with evolving forms of production and distribution in most of his work as a producer, including Jon Reiss’ self-distributed graffiti doc “Bomb It.” (He assures me it’s more from necessity than overarching game plan.) When he saw the footage anew, Levy-Hinte says that sound and image problems were sure to surface, but he knew that something glorious could come together with concentration. One great choice: the material is all from the concert. No retrospective interviews, just the sensation of those three days in Africa. The result seems almost effortless: an exuberant moment captured with clarity and grace. And someday? More footage, more DVDs. 93m. (Ray Pride)