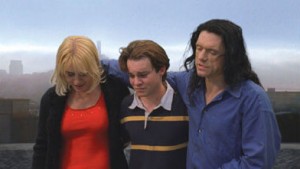 No one could have intentionally made a movie as deliriously bad as “The Room.” An epic of incompetence and lasting damage, Tommy Wiseau’s one-film oeuvre could make Ed Wood’s bones dance. Wood fondles an angora sweater in his “Glen Or Glenda,” but more out of poverty and mooniness than the rampant, preening, keening, howling narcissism of “The Room,” a tone-deaf tale of a romantic triangle in which the star-financier, a mug-faced man with oily, shoulder-length hair and an indeterminate Slavic-seeming accent, takes a directorial credit, a producer’s credit, and an executive producer’s credit, as well as revealing his bottom for five bouts of unappealing rumpy-pumpy with his beloved “Lisaaaa!” The plot is unfathomable, lacking logic or any sort of coherence, but its refrains, in Wiseau’s strange, whining voice—”You are tearing me apart, Lisa!”—are nearly as memorable as his small, strange, hacking cackle, a forced “Ha-ha Ha-ha!” occasionally topped by a further “Ha!” A sustained rooftop scene is shot against green screen, a striking but alienating effect that’s of a piece with the other unmotivated stuff up on screen. Prepare to hear audience members chanting the dialogue at the Music Box shows. It’s been running since 2003 in Los Angeles. With Juliette Danielle and Greg Sestero. 99m. (Ray Pride)