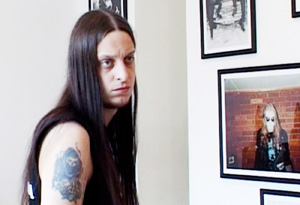 The subculture of Norwegian black metal music makes a compelling documentary topic in Aaron Aites and Audrey Ewell’s “Until the Light Takes Us,” which may be the most inappropriately gorgeous-looking movies in ages. The subject matter—the exploits and obsessions of a small group of Oslo-based musicians and performance artists dating from the 1990s—may be too finite a subject to resonate with audiences not already attuned to such dark esoterica. Several Norwegian churches were torched in 1991, and the leader of a “black metal” movement, Varg “Count Grishnackh” Vikernes, took credit, leading to police and press alike seizing upon the movement as a pernicious force. (Shades of Berlinger and Sinofsky’s “Paradise Lost.”) Nihilist diatribes, anti-Semitism, more church burnings, pagan ritual and murder follow. Who are these performance-art-terrorists? Ye shall know them by their face paint and their motley grievances. The filmmakers work to keep their distance, letting the subjects speak for themselves. In a directors’ statement, they offer a cue: “It’s uncommon to find an art movement that feels honest, compelling, and able to somehow express the overwhelming wordless horror felt by so many in our generation.  So we moved to Norway, where this all went down, and filmed for two years. What truly inspired us and inspires us still is that at the core, there is a group of kids who actually thought they could change the world with their underground music scene, and who actually tried to do so. Theirs was a violent movement of strange ideology and searingly raw and painful music, they were truly in search of a truth, and as the movie shows, they are now incorrectly known for being exactly what they despised.” With Gylve “Fenriz” Nagell, Jan Axel “Hellhammer” Blomberg, Harmony Korine, Kjetil “Frost” Haraldstad, Bjarne Melgaard. With music by Boards of Canada, Sunn O))), Burzum, Mayhem and Mum. 93m. DigiBeta. Aites and Ewell will appear. (Ray Pride)