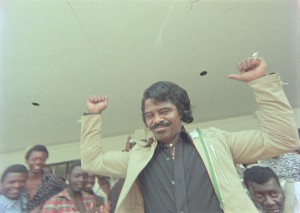 The first thing you see entering the room is the “Soul Power” poster, gaudy neon pink lettering in the style of early 1970s movie one-sheets, James Brown front-and-center, mouth wide in song under a 1970s-style mustache (once again in fashion). Looking at the one-sheet, you get a sense memory of the smell of dirty carpets from fraying movie palaces of the time.

Director Jeffrey Levy-Hinte’s resume is comprised mostly of projects as producer, idiosyncratic, filled with the voice of the filmmaker he’s protecting. He’s on the phone as I arrive, and it’s easy to figure he’s making snap choices on an economic crunch a film that’s about to start production is facing. It’s not a things-are-tough-all-over glimpse, but a small moment of what any day is for a hands-on producer.

Levy-Hinte began as an editor, working on Leon Gast’s Oscar-winning boxing documentary “When We Were Kings.” The powerful, joyous “Soul Power” is constructed from footage of the twelve-hour concert in Zaire that was meant to accompany the 1974 “The Rumble in the Jungle” fights shown in that film, always known a definitive R&B event. But the footage hadn’t been seen in years. There was such a wealth of material for “Kings” that footage hadn’t even been cut together, and was stored in various places. The result, drawing only upon contemporary footage, is thrilling for being such a piece of apocrypha: a great documentary experience drawn from film left fallow for almost thirty-five years. It looks downright fresh yet outright of its production era.

How many other films would be possible from all those dusty cartons, I ask. “It’s probably only limited by one’s imagination. Certainly for me, I saw ‘Soul Power’ when I looked at all the footage. And I was fortunate enough to be able to find it and present it. Maybe another film or two in there at least. For me, it was just getting out the concert performances, which is the easiest thing to do. You have the song, you have the camera angles, you can cut it in three days. But what really takes time in a [feature-length] vérité documentary is sifting through. It’s like doing a puzzle blindfolded. You’re feeling the parts, and you’re doing all the iterations until it comes into sync.”

Performances can be a chapterized DVD. “That’s a great thing as well. There’s an audience for these wonderful performances, our common cultural inheritance. Not to be sanctimonious, but I thing they’re a public good, but they’ve been locked up, it takes resources and some kind of money to edit and online and mix and all these things. I’d love to be able to bring [the rest] to fruition.”

Four great cameramen of the era shot the bulk of the footage: Albert Maysles, Paul Goldsmith, Kevin Keating and Roderick Young. “They shot in this vérité way, but they have their specific disposition for how they went about it,” Levy-Hinte says.

Maysles was known for being the best of his time watching the scene with one eye and the world outside the frame with the other. “Yes. The greatest thing is that he shot with the most ridiculously awkward cameras, the Arri BL, big magazines on it, extremely heavy, a big lens. It didn’t’ have any kind of wheels on it, you had to pull the focus and pull the zoom, the fact that he could compose such elegant shots on it is so amazing from a purely physical perspective. But whenever you see him? He has both eyes open. Then he has his light meter on top, in this little carrying case, so he can watch his light meter and he can rack his exposure. Those four guys were similar. They really had a tremendously intuitive sense. They kind of melded with that machine. It makes all the difference in the world. There are great cinematographers working today [in documentary], to be sure, but in that vérité realm, what passes for work is almost, instead of being thoughtful, it’s just, ‘I’ll run the camera, kind of point it in the right direction.’ It is very rare that they’ll sustain it. When I talk about each camera roll being its own single film, the premise of that is that every moment is connected to every moment. Whatever situation they were in, there wanted to make sure every frame was usable, to continue to evolve the shot and to find how to portray it, anticipating how you’d cut it and move around in it.”

“The thing that makes me nervous now is that tools are so accessible—as they should be—but I don’t think people respect them in the way they once did,” he continues. “In ‘Soul Power,’ those cinematographers would come to a scene, they’d know, ‘Okay, I have three rolls for the rest of the day.’ Of course they missed some things but what they got, they were engaged in. I’ve been doing large-format still photography. You take one shot and if it takes you an hour you’re actually ahead of the game for a single image. You’re extremely aware what you’re doing, how you’re doing it, how all the elements line up. But still I’m not experienced enough, but I’m very much into the discipline of the craft. Not that we should wear a crown of thorns, but sometimes a little more pain. A slightly heavier camera can help.”