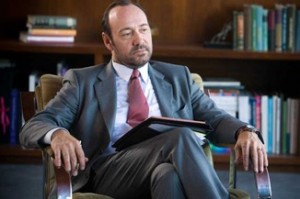 Set in an L.A. populated by analysts and agents, the uncynical “Shrink” is a moving seriocomic ensemble drama where a script is a catalyst for healing. The insider Hollywood detail is less indulgent than usual, and the “Hollywood” sign works into the mise-en-scene as a site for symbolic gestures less corny than usual. Overlapping client lists bring together characters treated by shrink Henry Carter (Kevin Spacey in another turn as a trauma-scarred touchstone), and those represented by Imaginative Artists agent Patrick (Dallas Roberts). Acceptably pat coincidences include two suicides that bond survivors, and a medical file that inspires a spec screenplay. Keke Palmer plays Jemma, another kid with talent and troubles as in “Akeelah and the Bee” and “The Longshots.” To skip a chemistry quiz, she pulls the fire alarm and heads to a matinee of “The Graduate.” She draws storyboards on the bus home. Carter, hyped as “Shrink to the Stars,” goes on a talk show and trashes his latest book “Stop Feeling Sad.” Far from buying his own advice, he smokes marijuana day and night to numb the pain of a personal loss. A brand labeled “Christmas in Vietnam” is laced with embalming fluid and that lands him in the hospital. Other well-written turns include Saffron Burrows as a big star in couples therapy, Pell James as Patrick’s personal assistant in her third trimester, and Mark Webber as an aspiring screenwriter. Original music composed and performed by Brian Rietzell and Ken Andrews proves an especially nice envelope for montages blending storylines for credible, if predictable, closure. Jonas Pate (“Deceiver,” TV’s “Friday Night Lights”) directs a script by Thomas Moffett based on a story by Henry Rearden. With Saffron Burrows, Jack Huston, Robin Williams, Robert Loggia, Laura Ramsey and Gore Vidal. 110m. Anamorphic 2.40 widescreen. (Bill Stamets)