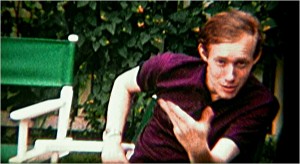 A day’s work is never done, especially if you procrastinate for years and die early. “The Windmill Movie” is the work of Alexander Olch, a protégé of Richard P. Rogers, known to friends as “Dick,” who died before assembling boxes and boxes containing 200 hours footage for a long-in-the-works autobiography. Rogers was an experiment filmmaker, started the highly regarded film program at State University New York at Purchase, ran the Film Studies Center at Harvard until his death in 2001 at the age of 57. While in concept it’s as tragic (at least to other writers) as the story of Joe Gould, whose much-touted novel was never much more than chickenscratch, the notion that a talented man and inspiring teacher born to privilege would work for decades on a 16mm story of his life without finishing it, does make the eyes water. In practice, you wonder if Rogers were simply chickenshit and boorish. But Olch’s alchemy makes something wonderful of what could be unbearable, a lyrical portrait of dissatisfaction, of restlessness and love of women and loathing of privilege. “It must be infuriating to hear someone complain about the Hamptons,” he’s heard to say. Why, yes. Olch’s apparent narcissism and readiness to complain might well be unbearable, but the film presents him as a complex case. Olch revisits friends and collaborators, including his widow, the photographer Susan Meiselas, Bob Balaban and in some scenes, Rogers is played by Wallace Shawn, also a Rogers friend. It’s a tautly constructed, emotionally messy delight. Rogers’ 1967 short, “Quarry,” opens the show. 82m. (Ray Pride)