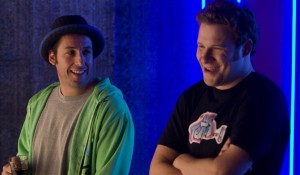 The more I think about “Funny People,” the more it seems that Judd Apatow has made precisely the (reported) $75 million home movie he meant to make.

It’s an ungainly gosling, epic with surfaces and, as over its two-and-a-half hour duration, out of its depths with depth. For his third feature, the veteran stand-up-gagman-TV producer-writer-director at times barely channels autobiography. The first three people thanked in the end credits are Garry Shandling, Paul Thomas Anderson and James L. Brooks: three godfathers that offer some notion of the turf he’s hoping to claim. First, there’s the bitterness, passive-aggressiveness, hostility and penis-obsessed humor of Shandling, for whom Apatow wrote on the piercingly harsh classic “Larry Sanders Show.” Shandling’s disappearance from the public eye is often chalked up to questions about mortality like those faced by Apatow’s lead character, George Simmons (Adam Sandler). Secondly, he’s attempting to go beyond the gag-charged confines of “The 40-Year-Old Virgin” and “Knocked Up,” attempting the tonal range, swooping from comedy to pathos, as in Anderson’s more expansive canvases, as in “Magnolia” or “Boogie Nights.” Third, there are James L. “Spanglish” Brooks’ equally elephantine epics that swoop from pathos to bathos with intermittently brilliant verbal gags. It’s a catalog of well-upholstered influences.

A couple of pages are torn from Cameron Crowe as well, with a music permissions budget that sounds at times as if it could be reaching “Almost Famous” stratosphere, and with Steven Spielberg’s shooter, Janusz Kaminski, candying up the visual palette the way John Toll does for Crowe. But with a few more dick jokes, to paraphrase the studio executive in Preston Sturges’ “Sullivan’s Travels.” Sullivan pitches “a true canvas of the suffering of humanity,” to which the exec ripostes repeatedly, “But with a little sex in it.”

Moment to moment, I enjoyed “Funny People,” but in retrospect, it doesn’t gel, with beautiful, lovingly observed moments that one should be grateful for lacking structural polish. Which may or may not be the fate of the comic. Apatow’s spent decades in the company of comedians, and as someone who spent a couple or three years around stand-ups and improv comedians, I cannot but admire the acute level of verisimilitude in the insistent low level of hostility and passive-aggressiveness in the behavior of all the male characters, including Seth Rogen as the aspiring comic taken on by George as factotum and joke-writer after he receives a diagnosis of a rare form of leukemia. Jonah Hill and Jason Schwartzman are Ira’s roommates, a chubby standup who mocks Ira’s recent weight loss, and a star of a terrible sitcom, respectively. The antagonism that goes beyond competitiveness, Apatow’s got that nailed. But he also veers into a plot involving “the one that got away,” with Apatow’s wife Leslie Mann playing the now-married mother of two (played by Apatow’s daughters) whom George selfishly attempts to again wreck the life of.

Touchstones tumble: Apatow’s eldest performs “Memories” from “Cats” twice; the film opens with sloppy video footage from over twenty years ago when Apatow and Sandler were roommates making crank phone calls. The Improv, where several stand-up scenes are set, is where they performed all those many years ago. Like Michael Mann in “Public Enemies,” Apatow wrestles with the idea that there is something ineffable about the site, the place, where a moment took place. Several shots in succession assertively establish that the bro-pad is located at the intersection of Melrose and Larchmont, with the Paramount Pictures water tower in near distance. I’d assume that means the young Apatow might have lived there. It’s personal, see. Apatow tends to indicate and suggest rather than dramatize, to telegraph rather than shape his material. However electric the by-play and true to form the comic sword-crossing, the lack of developed conflict and characters is fatal. Scenes sing. A charismatic new actress, Aubrey Plaza, deadpans marvelously. She’s a discovery.

Someone once observed that filmmaking is so complex and subject to so many variables, it’s a miracle movies are ever finished, let alone turn out good, let alone great. Still, “Funny People” is virtuous for its portrait of mischief and narcissism; while George gets a Get-Out-Of-Sick-World-Free card not only readily in the film, but also in the coming attractions, the question is whether or not he can become a better human being. “Funny People” is a better film for knowing that he will never be more than a needy shit, a needy shit who will always make with the dick jokes. George doesn’t really change: it’s in his nature. He’s a pitiful creature who has a role that runs right down the middle of the marketplace, something implied by the closing shot that backs away from an implausible, gentle, hopeful ending, pulling back, pulling back, away from a café table into a supermarket lined with bright shiny comestible products that do not linger on the palate. Sandler’s willing to play disagreeable, but “Funny People” inadvertently demonstrates the mad, grand achievement of “Punch-Drunk Love.”