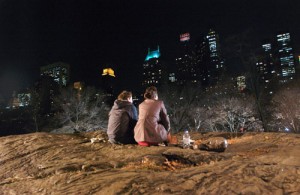 Or, “Rain Twink.” In writer-director Max Weber’s “Adam,” the 34-year-old Hugh Dancy (“Confessions of a Shopaholic,” “Savage Grace,” “Basic Instinct 2”) plays a twentysomething man of uncertain sexual affect whose life unravels after his father’s death. While high-functioning, Adam has Asperger’s Syndrome, making life difficult for those who don’t understand his racing mind, preoccupied with matters in the sky above, amid the cold beauty of the stars. He lives in an expansive New York apartment, which he inherits, and quickly loses his job as a toymaker. A new neighbor, grade-school teacher Beth (Rose Byrne) moves in upstairs. He’s smitten. He confides too much. She’s attracted but reluctant. He wants to take her to meet raccoons in Central Park in the middle of the night. The stars shine down on them. The English Dancy and the Australian Byrne find superb, if sometimes precious line readings, in their feigned American accents. The script is all too deftly structured, and if you glimpse a NASA moon suit in the first act, a sensitive young man must don it by the third. A subplot involving Beth’s criminal father (Peter Gallagher) and fraught mother (a welcome Amy Irving) seems drawn from a different Sundance project. With a shrill Mark Linn-Baker and Frankie Faison as the war buddy best friend of Adam’s late father, a working-class black man with lessons in life to share. The ending is so pert and pat it’s perfect for this project, earning a genuine smile in its closing image. 94m. Anamorphic 2.40 widescreen. (Ray Pride)