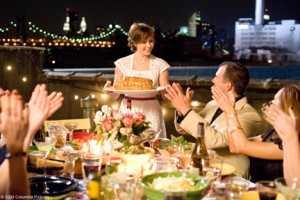 Writer-director Nora Ephron (“You’ve Got Mail,” “Sleepless in Seattle”) simmers an affectionate portrait of two American women linked by French cuisine. “Based on two true stories” reads a novel title at the start of this twin biopic about a cookbook writer and a blogger. “Julia” (Meryl Streep) comes from “My Life in France,” penned by the late Julia Child with her grandnephew Alex Prud’homme. Her memoir recounts how the self-described “six-foot-two-inch, 36-year-old, rather loud and unserious Californian” fell in love with French cooking during her husband’s posting at the U.S. embassy in Paris after World War II. In 1961 she published “Mastering the Art of French Cooking, Vol. I.” “Julie” (Amy Adams) is Julie Powell. The 30-year-old New Yorker turned her 2002 blog about preparing every dish in Child’s cookbook into the 2005 book “Julie and Julia: 365 Days, 524 Recipes, 1 Tiny Apartment.” Ephron alternates episodes in the lives of Julia and Julie for an ambling chronicle of Julia’s infectious bonhomie and Julie’s beguiling angst. “Julie & Julia” is more about savoring their company than suspense about how they will make their ways into print. Loving their roles, Streep and Adams are amusing, unassuming connoisseurs of life in the kitchen. McCarthyism and 9/11, respectively, offer counterpoints to the ensuing joie de cuisine. Unlike the performance artists who enacted all the tips of Martha Stewart and Oprah Winfrey, Powell appeared to undertake her homage without snark. Julie likens Julia to “some great big Good Fairy.” Ephron offers a butter-based alternative to “Super Size Me,” Morgan Spurlock’s thirty-day stunt of eating three daily meals at McDonald’s. Upgrading in-store pop tunes is a lithe, lilting score by Andre Desplat. With Stanley Tucci, Chris Messina, Linda Emond. 110m. (Bill Stamets)