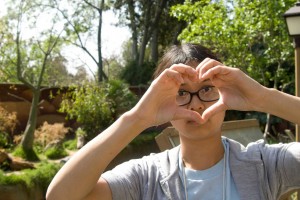 Twentysomethings say the darndest things. “Paper Heart” is a mock-doc quest for love, leading to loopy lines in a just-cute-enough vehicle for young comic Charlyne Yi. Part of her recent shtick has been on-street interviews where she asks a question and waits for a response, and waits, and waits, and she plays this card as the movie begins, leading to the genteel whine, “There’s not a soul in the world that wants to talk to me!” She’s as much performance artist as writer or actor, a tadpole reincarnation of Andy Kaufman. Real/fictional Yi decides to cross the country in search of the meaning of lasting love after she states she doesn’t believe in it, has never felt it. “Paper Heart” was directed by Nicholas Jasenovec, who is played in the film by actor Jake Johnson as a prodding presence to get on with it. The couples she talks to, including several bikers, about-to-be-marrieds in Vegas and a judge-prosecutor duo, were found by a casting director, Yi told me in a recent interview, and most of them nailed their stories in a single take. Yi then adds dramatizations of these stories, puppet animations largely done with paper and yarn, executed with the help of her father. Additionally, there’s a fictionalized part about her courtship with her boyfriend Michael Cera. Cera wanders into a party scene, and the movie, as the human afterthought he usually plays, his placid yet continuously rippling demeanor like electrocuted milk. They’re an odd duo, the tall underplayer and the small, compulsively giggling girl perennially tucked inside a hoodie. The mix sounds cutesy enough to kill, but it’s a fantastic vehicle for Yi’s beguiling unease. The score is by Yi and Cera.  (Ray Pride)

For Yi’s answer to whether she now believes in love after completing her project, go here.