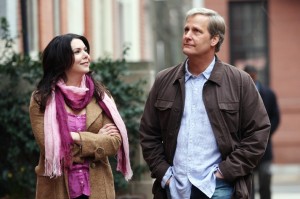 For his first feature, writer-director John Hindman tries a comedy of therapy wherein three absent fathers—lost to Alzheimer’s, alcohol and adventure—leave an author, a bookshop owner and an arithmetic-challenged 7-year-old to find their fixes in one another. The man in the title is a Philadelphia recluse who wrote a book that claimed to channel tips on life from the man in the clouds. Twenty years ago Arlen Faber (Jeff Daniels, the blocked writer in “The Squid and the Whale”) published “Me and God,” which was translated into a hundred or so languages. “You have ten percent of the God market,” plugs his publisher (Nora Dunn). Unlike Neale Donald Walsch—whose book “Conversations with God” has been translated into only thirty-four languages and whose life inspired a 2006 film—Arlen is no self-promoter. This surly jerk snaps at his mailman who’s read his book forty times. The turnaround in Arlen’s own spiritual plotline is his first-ever public appearance. He chooses a Philadelphia bookstore about to go out of business as the site for his last-reel Mao-style rite of self-criticism. His apology for misleading his worshipful readers is also a plea for forgiveness pitched to the owner of the nearby Straighten-Up Healing Center. That’s chiropractor Elizabeth (Lauren Graham from “Gilmore Girls”), his romantic interest working on his spine and soul. Hindman is less adept at massaging his characters. You know Arlen is on a self-help upswing when he takes his precious plastic figurines from classic monster movies out of their cabinet. Hindman even answers the old joke: Doc, will I ever be able to play the piano again? It turns out Arlen is at fault for the omnipresent tinkly piano music that medicates “The Answer Man.” With Kat Dennings, Olivia Thirlby, Max Antisell, Tony Hale. 95m. (Bill Stamets)