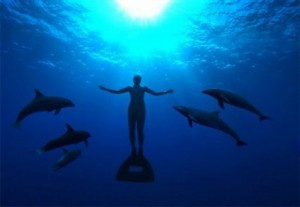 “The Cove” is filmmaker Louie Psihoyos’ thriller about inhumanity in the food chain, a $2.5 million-budgeted, queasy-making doc in the form of a slick action film that demonstrates the reckless endangerment of the oceans, especially in the harvesting of dolphins for water shows. The central figure is Ric O’Barry, who was the trainer for the dolphins who portrayed Flipper in the show of the same name, and who has tried to atone for his role in popularizing the exhibition of dolphins by becoming an activist in the decades since. Gathering a crew of specialists, including free divers, camera experts and artists from Industrial Light and Magic, who design fake rocks to hide cameras and microphones inside, the film rushes toward capturing the slaughter of hundreds of dolphins in the Japanese fishing village of Taiji. Park operators prefer the female bottlenose dolphin; those that don’t sell are killed in a secluded cove out of view to passersby. Psihoyos’ approach is urgent without becoming strident, although some may resist its open self-comparisons to the “Mission Impossible” and “Ocean’s” movies: “Impossible Ocean” it is. There are echoes of Errol Morris, Michael Moore and “Koyaanisqatsi” director Godfrey Reggio, but the alarming result is its own beast: an activist documentary financed by a billionaire, Netscape founder Jim Clark, working with the kind of dash and flash usually reserved for fiction. The end credits are euphoric in sound and image, and a post-credits scene has an ironic line that creates its own context: “For the children, you see?” 90m. (Ray Pride)