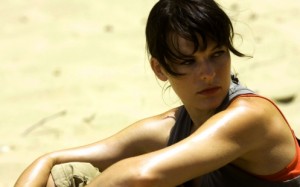 Writer-director David Twohy (“The Chronicles of Riddick”) opens this sub-par psycho-thriller with a wedding video. Pals from film school give the groom a send-off for a Hawaii honeymoon. The next couple we see pays in cash for hiking permits for the Kalalau Trail leading to “the most gorgeous dead-end God ever made,” according to a local. As newlyweds Cliff and Cydney (Steve Zahn and Milla Jovovich) drive off, their jeep wheel rolls over a newspaper with a front-page story about the grisly slaying of newlyweds. En route to the the trail head, Cliff and Cydney meet a creepy couple of white-trashy hitchhikers Cleo and Kale (Marley Shelton and Chris Hemsworth). Class friction and paranoid profiling ensue. On the trail, Cliff and Cydney meet another couple, Nick (Timothy Olyphant) and Gina (Kiele Sanchez) who seem less creepy than Cleo and Kale, at first. The press notes brag that Twohy “happily breaks the conventional rules of three-act linear storytelling” and that he “refused pressure from other would-be financiers to make the story more conventional.” Not spoiling anything other than Twohy’s shaky take on genre, but his “script’s arrhythmic structure” amounts to little more than one black-and-white flashback that explains a twist. Hard to imagine: this thriller has a twist. A tad more imaginative is outfitting Iraq vet Nick with a portfolio of war stories and a titanium plate in his skull. Nick’s extreme detailing lends itself to cute banter with screenwriter Cliff about turning Nick’s exploits into an action script. Cydney tells her own tales, including one about a lover’s lane incident where Goldy, a neighbor’s Labrador Retriever, hangs from a tree with panties wrapped around his neck. Borrowing stories from strangers, and play-acting them in front of other strangers is the film’s less-than-original idea. The setup and switchback, though, are not at all thrilling. And “A Perfect Getaway” looks real crappy, like as if it were shot on VHS. With Marley Shelton, Anthony Ruivivar, Dale Dickey and Peter Navy Tuiasosopo. 97m. (Bill Stamets)