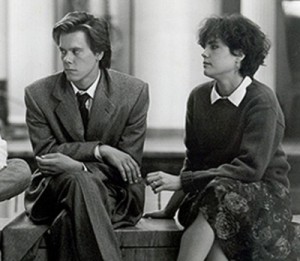 U2 was singing “Angel of Harlem” when I walked up to John Hughes’ production office on the Paramount lot. In the late eighties, a time before iPods, it must have been coming from a radio somewhere. I was in L.A. on vacation, visiting some of the people I’d met and worked with as the assistant location manager on the film “She’s Having a Baby” the previous summer. It was one of the grander and more teeth-gnashing experiences I’d had in my burgeoning career in film production, and I was thrilled about it. John was great, through and through; unassuming, funny, kind and focused.

One of the my first assignments was to go along with the location manager to the charming Skokie neighborhood we’d selected as our primary “film set” and get permission from each of the homeowners to shoot there. Scenes we intended to shoot were Jake (Kevin Bacon) tearing out of his driveway when Christy (Elizabeth McGovern) goes into labor, and the ‘lawn mower ballet’ that Jake sees in a dream sequence.

Reaction was mixed at first, and in the end we got everyone’s permission—even the grumpy ones. The cachet of the cast helped a lot. With Kevin and Elizabeth surrounded by John Ashton, Holland Taylor, William Windom and the “new guy” Alec Baldwin, we soon had many friends during the shoot.

If it’s true that a writer is each of the characters they create, I could see this in John. For me, he was mostly Ferris Bueller—smart, sweet, mischievous. Remember the ’61 Ferrari? Getting pushed to my edge by John’s requests was an excellent learning experience. What I remember most were the “creative spontaneity” requests. Of course these are a part of the process on virtually all shoots.

Following the clearing of the neighborhood, and other less-than-film friendly locations (if memory serves), it was this: “Kim, the church is filled with 200 extras for the wedding scene. John has them all singing ‘Take me out to the Ball Game.’ Is camera up?” or “Kim, John wants to run the commuter train in Glencoe past midnight. Can you get permission?” (We didn’t; he did it anyway.) “John wants to shoot the club scene at Limelight. How much would it cost to buy them out for a night or two?” “Can we stop traffic on Michigan Avenue between Oak Street and Chestnut for Kevin’s running shot?” And my favorite, “John wants to put a grip with a camera at the top of the escalator at Spiaggia and have him slide down the rail for a point-of-view shot.” Each one ended in, “Would you make that happen?”

While shooting at the Glencoe train station, the pay phone on the side of the building became my “office.” At one point during the shoot John had a spontaneous creative idea: I was to be the “Mom” dropping off my city-bound “husband” at the train. I so didn’t have time for this. Of course I did it anyway. John put his two sons in the back seat; I kissed my screen husband goodbye and drove away. I made it happen because there wasn’t an option with John.

Of course, at the end of the day, it all happened. It all happened because that’s what it takes to make great movies: a gifted writer/director and solid crews that make it happen under his direction. What a pleasure it was to work with him. (Kim Bastyr)