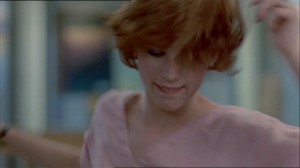 “We’re all pretty bizarre. Some of us are just better at hiding it, that’s all.”

The early John Hughes movies spoke to the kids that kept their mouths shut during school. I was one of them—interested in sports but not very good at playing them, interested in writing but too shy to seek out a place at the school paper, interested in girls but, well, you can imagine how that would be for a pimply-faced nervous wreck who weighed just over a hundred pounds. I had some friends; we spent most of our time alone in our bedrooms teaching ourselves how to play guitar. But one thing that was always there was “The Breakfast Club.”

“Screws fall out all the time, the world is an imperfect place.”

It started in junior high, when I’d view the film almost weekly in anticipation of what high school was REALLY going to be like. Finally, diversity. Finally, girls. People can talk how they want to talk and not be afraid. In high school, you’re like, totally almost an adult. Five disparate kids sent to Saturday detention; through conversation, they come to understand their differences and their lives are changed. Sound silly? I wanted to be all of them, but was hardly any of them. Bender, the cool rebel. Andrew, the successful jock. Claire, the popular princess. Allison, the artistic misfit (she was the one who later, I’m sure, really got into indie rock). And Brian, the brain, who if you watch the film closely, reveals himself to be the most important character, the one who really brings the group together. Shit, I even wanted to be Carl, the school’s janitor.

Speaking of Carl, in my senior year of high school I worked at The Second City and one night met actor John Kapelos. I was starstruck. I had met other celebrities through that job before—Martin Short, Alan Arkin, Dan Aykroyd, Jim Belushi—but Carl was the biggest deal to me. I nearly pissed myself in excitement, and if I wasn’t scared shitless would have thrown a “Carl, don’t be a goof” his way.

“The Breakfast Club” was bible. There were nights of quoting contests with friends. Trying to convince the theater department at our school to produce a play version of the film in which we could act. Writing angry letters to WGN after we witnessed a TV-edited version that completely extracted the pot-smoking seen. For the life of me, I can’t remember if those were sent. More than likely we finished writing and went and smoked some pot and forgot all about it.

“When you grow up, your heart dies.”

I read a recent tribute to Hughes that included a quote from the man, on how when you’re 16 years old you’re as serious as you’re ever gonna be, how that’s the time when you’re really asking the big questions. I think he was on to something there. I’m certainly not as pessimistic as I was back then. But also, in a way, I’m not nearly as optimistic either. I want to meet my 16-year-old self and tell him to drive slower and not to worry, there will be Allisons down the road.

Last week was my ten-year high school reunion. I didn’t go. It wasn’t even a question…as soon as I got the invite I tossed it in the garbage. There was a little tinge of sadness in that, how it’s really a shame that I don’t talk to those people very often, and more of a shame that I don’t seriously feel the need to do so. Also, I’m not paying a hundred bucks to sit it in a room with dozens and dozens of people I didn’t like while they get hammered. In light of Hughes’ death, I sort of regret not going, though. There are only so many things that can remind us of who we used to be.

“When I was a kid, I wanted to be John Lennon.”