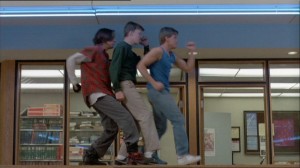 People often speak of the seventies as being a foul time for popular music—I would humbly submit that the years I attended high school, 1986-1990, were far, far worse. Stuck in the limbo between the decline of new wave and everything that happened post-Nirvana, MTV was an unintentionally comedic display of Winger, Warrant, Whitesnake and White Lion, and radio was Bananarama, Paula Abdul, Milli Vanilli (you get the idea). Granted, there was a bona fide alternative music scene at the time (even if many of the best punk/hardcore bands of the eighties were finished by then), but in terms of your basic uber-culture, contemporary rock ‘n’ roll music was a sham offering next to nothing that a suburban Central Florida teenager like myself needed to survive high school.

So, with that kind of raw deal, besides turning to the music of the recent past (The Who, Buzzcocks, Ramones), it was necessary to look to other mediums to find knowing and understanding guides through the proverbial teenage wasteland. Enter John Hughes.

So many try, and so many fail at getting the Teenage Experience right. The unfortunate tendency—especially in the 1980s—was to reduce teenagers to their fashion stereotype, or make them into the protagonist of present-day morality plays (“See, Bobby! This is why I told you to say no to drugs!”). It’s the most unusual time in life—veteran kids/rookie adults—and the tendency among most is to forget all of it once you pass through it (the local yokel retail bosses, pimples, girl trouble, algebra), or cling to those “glory days” for far too long (my old band, the backseat of the Trans Am, my position in Varsity). Either way, when confronted with real teenagers, the jig is up. It’s better/worse than you remember; it’s smarter/stupider than you think. Either way, you’re old now, and have no clue what it’s about.

Twenty-three years later, I can still recall watching “The Breakfast Club” for the first time. There they were—the five major cliques I saw every single weekday. Shermer High School was thousands of miles away from Lake Brantley High School, but I had talked rock ‘n’ roll with the John Benders before they went off to smoke (something), had served detention under douchebags like Vernon, had been called “band geek faggot” by the Andrew Clarks, laughed at the Brian Johnsons and their Velcro sneakers, felt the thrill in spite of myself when the Claires deigned to speak to me, felt the sullen depressed withdrawal of the Allisons. In catatonic silence or spastic mania (there was no in between for me), I observed these people. I saw them in “The Breakfast Club,” and I saw myself. But, Hughes cared enough about us eighties teenagers to dig deeper than the cliques, to find that third dimension we all knew we had. He cared enough to give us jokes we could use in the hallways, archetypes to relate to—characters going through the same ugly shit teenagers then and now go through—loneliness, disconnect, divorce, frustration and worse—characters trying to figure out a way to deal with it. My ninth-grade mind wouldn’t think this way, but now, I can say it: the man cared about getting us right.

In my mind, only J.D. Salinger, Pete Townshend and The Penetrators ever came this close to getting adolescence right. Even recently, while reading in another local publication an “indie roundtable” of 1980s teenagers now in their thirties and forties bemoaning these kids today with their iPods and urban outfitters, I was reminded of the wisdom of Carl the Janitor when Principal Vernon made similar lamentations: “The kids haven’t changed. You have.” (Brian Costello)