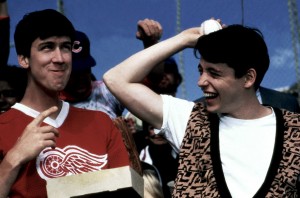 “Breaking News” from Variety on my phone on the 66 home: John Hughes dead at 59. Eyes sting a little and immediately I remember the Simple Minds lyrics, “Don’t you forget about me, no, no, no,” heard in “The Breakfast Club.” John Hughes, the man, had been all but forgotten as a briefly prolific filmmaker (eight features in eight years, thirty-five-plus script credits), but the movies, the lines of dialogue, comic and observational, and yes, the songs, they’re stuck in an impressively expansive collective brain.

Five-and-a-quarter-inch floppy disks and loose pages spilled across the surface of the desk. “These are his pages,” the woman offering me the sudden urgent weekend task said. “What you have to do is take all these typed pages and make sure they match up to the pages on the disk,” compiled in a now-defunct, now-obscure word-processing program, “and you have to be careful not to change anything. John doesn’t like anyone changing things. A comma, a word. We just need a working copy for the production office.” I looked at one of the several front pages. “Uncle Buck.”

John Hughes made a step toward the grown-up pictures he might have made with “She’s Having a Baby” (1988), a flawed movie that was unfairly demolished in its time. He’d stepped out of the All-Purpose Room of the eternal high school and nodded toward onrushing adulthood, crushing responsibly. That reception could be part of what led to his retreat. After that, he only directed “Uncle Buck” and “Curly Sue.” His voice, his perspective, in retrospect, are missed. The 1990s were a time that his Chicago copywriter instincts could’ve made great play with that go-go time, building beyond his depiction of the spleen of the job-bitten Willy Lomans of “Planes, Trains and Automobiles.” Steve Martin’s f-bombs in certain passages are epic, sure. But Hughes was the man who reputedly delivered the print ad that demonstrated how smooth a shave could be by a man running a credit card along his jaw with no audible skaaaaatch. Striking advertising and self-aware self-satire in a single strophe: that smooth sound of no stubble at all shout that “Wall Street” and “American Psycho” have always been missing a John Hughes picture to complete a triptych. 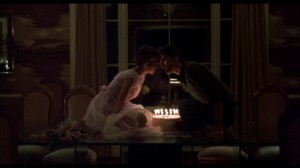 “People forget that when you’re 16, you’re probably more serious than you’ll ever be again. You think seriously about the big questions,” Hughes told Roger Ebert on the set of “Sixteen Candles.” Of course that’s true and of course it’s not. We’re serious about different things at different ages. What would John Hughes, Jr., son of Lansing, Michigan, have been serious about if he were still a director in action, on the floor? “thirtysomething” was the successor to Hughes, the vanities and fears fifteen years on. But what if Hughes had been an American Truffaut? Past Truffaut’s even-earlier passing at the age of 52? Hughes knew bruise and shielded hurt but didn’t make it to lasting damage as a subject for his public art. There was dandruff in “Breakfast Club” instead of rivulets of blood that run from the contusions of the 2000s’ exploitation of teen fearfulness: let’s not talk hostile torture porn while Bueller’s still in the shower.

A consulting producer to “Mad Men”? Or “Mad Men” ten years before Matt Weiner typed his fantasy out? Hughes relished the milieu of the agency office. Skip ahead a lot of inevitable decline: I’d never go so far as to wonder if he could have made his “Sarabande” at the age of 80, the kind of hard astringent nut of a life’s emotional contraction like Ingmar Bergman punched toward, but Hughes had engaged the adult world with that first, solitary, abortive step. “She’s Having My Baby.” Then: I’m having my privacy.

“Don’t change anything.” The direction blocks on the page were simple in this mass strewn across my floor, everything straightforward. Hughes had written it for himself to direct, not to get anyone’s approval. My copy-editor’s training did kick in a couple of times, to be honest. A few words that seemed out of place, I fixed. Changed a couple, maybe three. A “That” for a “Which” and the like.

Eyes open, eyes wide behind tortoise-shell glasses, he’d want what the NME (New Musical Express) wanted and what Smash Hits liked, too. Someone could compare English chart hits to songs he wedged into the U. S. teen brain. He heard a teen heartbeat and he listened for the songs and made them the currency of a generation (and their generation-younger siblings, nursed on VHS and weaned on DVDs). 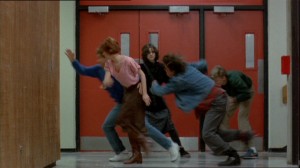 “In ‘The Breakfast Club,’ I played the Simple Minds song three times, with three mixes—the demo, an instrumental and a vocal mix at the end,” Hughes said in an old Gil Kaufman interview just published on MTV.com. “You had a raw sound on the demo, then it went into a finished instrumental track and then we played it at the end. People get used to music by hearing it repetitively. You play it three times, so by the end of the movie they will get it. And it was a hit, which was really fun for me—to make a hit of a band, that I gave a platform to a band that didn’t have one before.”

Now we wash in pop like birds in a birdbath. Hughes was one of the first bathing his wings in sunlight.  Tarantino… Tarantino… raise your hand. What has “Pulp Fiction” got to do with “The Breakfast Club?” You have five, I’m sorry, you have 165 minutes to elaborate.

Any of those songs from Hughes’ soundtracks come on, wherever, however, radio, iPod, juke, passing red Ferrari? It’s like, Molly Ringwald (pout-mouth) or Judd Nelson (mirror face) or Ally Sheedy (bitten bangs) or Anthony Michael Hall (you big pale blue-eyed dork!). Staring directly at you. Or dancing, some, maybe.

Hughes’ directorial style was straight-on, plain in ways, underrated. In memory, I class his style as stately, using widescreen in formal ways in the midst of early MTV-styled camera yaws. It was never fully fashioned, but he was abetted at least once by Dede Allen (“The Hustler,” “Bonnie And Clyde”), defining the confines of “The Breakfast Club.” Hughes’ ad-fashioned instincts went, and would have gone, in places Michael Bay never has or shall, like the Swedish slo-mo manic Roy Andersson: space, time, place, hiccup, heartbeat.

He had an age and an era. Like Salinger, like the early, epic Pynchon reflected their own. Hughes hadn’t released a movie as a director since “Curly Sue” in 1991. Eighteen years. Terrence Malick took twenty years between “Days of Heaven” and “The Thin Red Line.” Hughes was due! “A friend of mine ran into him and kidded him about having disappeared from the Hollywood radar,” Roger Ebert wrote in a piece last Thursday after the news. “I haven’t disappeared,” Hughes said to Ebert’s pal. “I’m standing right here. I’m just not in Los Angeles.”

Ten years later, give or take, after collating that wild pile of miniscule variations, I was scanning spines of screenplay manuscripts at a store on Hollywood Boulevard. Junk, junk, got that, “Chinatown,” junk, “Ghostbusters,” “Uncle Buck”? I slide it from the shelf. Turn the pages of the photocopy. Typeface familiar: not the standard Courier. Ohhh… my. On the last page, there it was: my name and now-past Bucktown address, phone number, in case anyone needed screenplay computer services a decade later. That for which and such: intact. This was the shooting script. Could I have added a fart joke? Did I add a fart? Word for WordStar, WordPerfect. 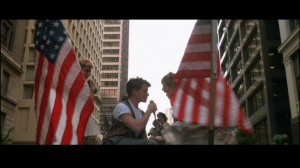 Sad thing is, the only scripts with Hughes’ involvement likely to rise from the bowels of Development Hell will be the high-concept ideas that he punched out in the early 1990s that in later years, as they were rewritten, he would only sign, not forsaking his royalties, as Edmond Dantès, a character from “The Count Of Monte Cristo,” who eventually shows them all. Sad to realize, Hughes will now never make the movie I always thought he was destined to make: the American Jacques Demy-style  sung-through romantic musical satire of twenty-first-century life.

John Sturges was the director who reacted to some demand of Steve McQueen on the set of the misbegotten racecar vehicle “Le Mans,” “I’m too old and too rich for this shit!” and flipped the script at the star and walked. Hughes seems to have said the same, much more quietly, in 1991. The story that emerged over the weekend of his teenage pen pal, Alison Byrne Fields, appeals to my rank sentimentality. Both ideas may well obtain: but when you’re outside the orbit of a family’s life, of a mind not your own, you only want the work, you’re selfish, you’re only after your own needs and wants: where are there John Hughes movies about being 30, 40, 50, 59, 60, 61?

2 Comments
Inline Feedbacks
View all comments
Don’t You Forget About Me: John Hughes and Our Teenage Heartbeat | Newcity Film

[…] and experiences related to the John Hughes experience, and received an overwhelming response.Please Please Please Let Me Get What I Want  by Ray […]

I’ve read a lot about Hughes lately, including Ebert’s piece. This is one of the best.