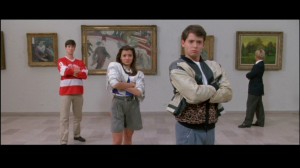 I was Duckie. I was Duckie and Gary and Wyatt too; my feeble attempts to attract the girls, a blowup lab of weird science. But mostly I was Cameron to a Bueller: a little lord of misrule brambling my Ivy-climbing tightrope. We took the Cadillac for a joyride, saw triple at 4am; he had sex with his underage stripper girlfriend on the neighbor’s lawn. I couldn’t get laid if the Swedish Bikini Team parachuted into my Y-fronts.

Not that I really wanted that, regardless of my furious tallywhacking of Portnoy prodigiousness. In the long dank high-school hallway of the 1980s, under pressure like a stubborn blackhead, I wanted Beauty and Sympathy and Understanding. The culture told me to fuck, ralphing up “Porky’s” and T&A excreta by the dozen, and despite the breast of intentions, I’d slip those tapes by the video-store clerk in furtive shuffles.

And then there was John Hughes, who told me to myself—who told our teenage selves to all of us, with a unique language of American adolescence, in a magical-realist Midwest where wit was a gateway drug to the acid of honesty. Beauty, Sympathy, Understanding, Wit and Honesty—all the values so vacant from pop culture, from teenage society, from the plastic passions of the South Florida where I grew up—these “The Breakfast Club” and “Ferris Bueller’s Day Off” gave generously.

One scene always returns to me—the set-piece in “Bueller” at the Art Institute. Breaking out from the brain-snatching prison of school, they join hands with the elementary kids and stand before the Impressionists, the Cubists, the Abstract Expressionists—miming the bold, resistant solidity of Rodin’s “Balzac,” gazing upon Picasso’s “Blue Guitarist” and Pollock’s chaos.

Like Hughes’ musical choices, these were analogues of consciousness for the transgressive trio. What is art? What is love? The first I ever knew of love was Matthew Broderick and Mia Sara kissing before Chagall’s radiant blue windows. What is art? What is pain? Pain is the toddler bawling alone, amid the grand pointillist extravaganza of Seurat, that Cameron focuses upon—into the scream, the muddled dots, the very threads of the canvas, abstracting the detail from the bigger picture. The interplay between the love and the pain—and breaking the rules to understand it—that was art, and John Hughes was the first to teach me that.

I just re-watched “Ferris Bueller”—it’s aged strangely. I recently got back in touch with my friend, my former Ferris, after twenty years, Oh, he broke all the rules, and paid the price. I pump him for info on those stripper orgies, but secretly I’m glad to have been the Cameron, accepting the responsibility—like Anthony Michael Hall’s Brian, in “The Breakfast Club,” trying to speak the many voices of ourselves, to try us who we think we are: like John Hughes, whose work was not without fault, not without its pat schematism, but who was one of the great humane voices in the cruel world of the adolescent 1980s. (David Schneider)

1 Comment
Inline Feedbacks
View all comments
Don’t You Forget About Me: John Hughes and Our Teenage Heartbeat | Newcity Film

[…] The Art of Ferris, Wheeling by David Schneider […]