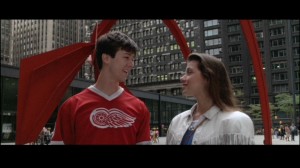 There will likely be no gold-plated casket for John Hughes, no huge wake at the Staples Center in Los Angeles and no blowout eulogies or mournful dirges from Al Sharpton and Stevie Wonder.

There should. (Please hold the bad guitar solos from an opportunistic John Mayer, though.)

While I spent my childhood mesmerized by Michael Jackson, I spent my life in communion with John Hughes.

Jackson was a superhero, his Moonwalk a secret power. Though inspiring, he was as unrelatable as any man who calls a chimp named Bubbles his friend and embraces baby tigers while striking model poses in a Don Johnson leisure suit.

Sure, from his J.D. Salinger-like reclusiveness to that tortoise-shell-eyeglasses-adorned-hunky-brooding look in the press photo making the rounds last week, Hughes had his quirks.

But, yearbook photos circa 1988 will confirm many of us also had our own questionable pompadours, frizzy haircuts and Oliver People’s-plastic-glasses-frame phase.

And, while Jackson would dangle a baby, unveil the latest horrors of his alleged plastic surgeries, and celebrate the scorn and ire he raised with a concert, an album or a stroll through a public market in a SARS-virus-chic ensemble, Hughes embraced failure in a more human way.

No one knows for sure, but it seems cinematic failures like “Curly Sue,” “Dutch,” and “Beethoven” maybe did him in, turned him into a bit of a haunted Elvis-like figure roaming his North Shore mansion or his farm in Harvard, Illinois in search of what went wrong.

However, he was a silver-screen god with a body of work and success that would power the weakest of us through any minor detour. They say that great artists create their own worlds and draw us in. But, for a guy like Jackson or his pixie shadow Prince, who roamed around concert stages in leopard-skin toreador costumes displaying his fulsome ass cheeks, we need a little coaxing. And once in, we likely only make a short trip to their planets.

We already lived in Hughes fictional world off Shermer, Illinois. We were immersed, some of us literally, as denizens of the North Shore, and for others, like myself, in an analogous suburban wasteland like Shelby Township in metro Detroit.

Without Hughes, maybe there is no Judd Apatow or Kevin Smith. The redemptive nerd a la Anthony Michael Hall in “Breakfast Club” and “Sixteen Candles” opened a window for a show like “Freaks and Geeks” to sneak in to a television studio programming line-up. And without that there is no “40 Year Old Virgin” and no “Superbad” McLovin.

Loveable foul-mouthed misfits like Jay and Silent Bob didn’t hang out on the corner terrorizing the folks at the Quick Stop in Red Bank New Jersey without the off-kilter misfit Judd Nelson portrayal of John Bender in “Breakfast Club” leading the way.

John Cusack may never be standing outside his girlfriend’s bedroom window holding a boombox over his head in “Say Anything” if he hadn’t done a turn as a wallflower in “Sixteen Candles.”

As the son of an autoworker, I finally saw a sympathetic portrayal of my family for the first time in the Hughes-written “Mr. Mom.” My own father never held my naked baby butt in front of a restroom blow dryer, but like Michael Keaton, he’d been laid off plenty of times during the 1980 auto-industry meltdowns.

Though my father was a blue-collar guy, he was not the foul-mouthed beer-drinking stereotype. He is as Catholic as they come, a Cotton Mather fire-and-brimstone type who heeds no public nudity. His was a couch-potato gunslinger ready to quick draw the remote control and fast-forward through a movie’s nude scene. He once changed the channel as I watched Michael Jackson and Naomi Campbell cavort around the “In the Closet” video because it was “too sexy.” If not for the shower scene in “Sixteen Candles” or the Beverly D’Angelo topless set in the “National Lampoon’s Vacation” (not to mention Rusty’s frolic with nude German babes in “European Vacation”) I may have never seen a boob until I left for college.

But who needed boobs when that saucer-eyed femme with red ringlets Molly Ringwald pursed her lips and fretted over her family’s indifference to her birthday. For me, Ringwald is an essay unto herself, but, in short, she was the reason for my Teen Beat and Bop subscriptions.

Though he was stern, there was always a little Clark Griswold in my father. Our “Family Truckster” was no well-worn woody, but a two-tone teal 1984 Lincoln Town Car, a swaying land yacht as fine as any chariot for our cross-country swoop past the St. Louis arch and the BBQ joints of Kansas City.

Hughes’ glittery celebration of the skyline in “Adventures in Babysitting” (though one knock on Hughes—the responsible womanly version of Elizabeth Shue in “Adventures” sadly shattered my ideals of her girlish Allie from “Karate Kid”) and Ferris Bueller’s romp through the city explain my own journey to Chicago and my desire to live here. If Cameron Frye could rock a Red Wings jersey in the land of Blackhawks, so could I. Though I am a Sox fan, I never miss a chance to say “eh, batter, batter, swing batter…” when I’m in the bleachers at Wrigley.

As much as we recognized Hughes characters in ourselves, they were best because they were monster archetypes. We all had crazy childish uncles with good hearts, but none as brazen as John Candy’s Uncle Buck. We wished our uncles so generous and imbecilic that they’d make monster pancakes with a snow-shovel griddle and beat the hell out our good-for-nothing significant others.

As larger than life portrayals, they were still inspiring blueprints for how we might be. Watching “Breakfast Club” or “Sixteen Candles” in junior high, I couldn’t wait to earn a detention in high school and to romp around unfettered pulling pranks.

But, I’m way past high school now. I never got a chance to slide down a Loop skyscraper roof like the girl in “Adventures in Babysitting.” Though I smashed that Lincoln Town Car into a mailbox during an icy winter skid, I never pulled a Long Duck Dong and crashed it in to a “lake, big lake.” There were no panty-stealing hijinks at my own high school dances.

John Hughes death reminds that I’m probably old enough to be Macaulay Culkin’s father in “Home Alone.” It’s a punctuation point on the passing of my own childhood and the reality of a shorter life left. Hopefully the rest will be brilliant, but it will likely never be as spectacular as the shenanigans of Shermer.

Thankfully, I was born in the era of the VCR and live in the decade of the DVD player. Who needs a teary farewell from Brooke Shields or an aria from Tito Jackson? The Simple Minds croon in the theme song to the Breakfast Club, “Don’t You Forget About Me.” As long as there’s a widescreen somewhere, John Hughes, we never will. (Michael Nagrant)