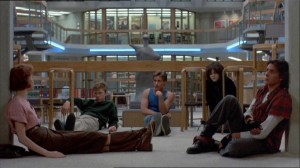 By any meaningful standard, being an American teenager sucks pond water. (It’s probably worse in Beirut, I know, but let’s save that discussion for another time, friend.) Nothing interesting is happening—all the real-life conflicts and adventures are thrice-told clichés, and most of the excitement exists only in fantasy and potential. Every popped zit feels like the explosion of Krakatoa. Everything goes on your permanent record. And you’re not even allowed to commiserate with most of your potential allies; tribal cliques set every teenager at odds with every other, and it’s death to traitors.

Thus, by any meaningful standard, “The Breakfast Club” is an Important American Film. It was the first humanistic teen comedy, dragging the genre above the cynical jerkoff fodder of “Porky’s” forcing a serious examination of high-school scene politics, and concluding with profound optimism. Every “American Pie” or “Juno” owes an impossible debt to John Hughes and the kids from Shermer.

But, here’s the thing: “The Breakfast Club” could have been even “better.” According to a Premiere magazine profile of Hughes, his original cut was two-and-a-half hours long. Smelling a blockbuster, Universal convinced Hughes to trim the film significantly, facilitating a broadly influential hit but depriving the world of the teen-angst “Citizen Kane,” a sprawling, skull-cracking epic.

What did we miss? We miss Alison’s dream sequence, which looks weirder than anything in Terry Gilliam’s vision of “Fear and Loathing in Las Vegas.” We miss Paul Gleason (Principal Vernon)’s voyeurism, and a much sexier seven minutes in heaven with Claire Standish (Molly Ringwald) and John Bender (Judd Nelson). (Ringwald says so herself.) We miss a much more graphic illustration of Bender’s physical and psychological abuse, in which he’s dubbed “a waste of lunchmeat.” We miss Alison smoking a cigarette and writing with her feet. We miss Carl’s (John Kapelos) agonizingly misanthropic predictions for the quintet as adults. We miss psychedelia, black comedy and a lot of rich character-building. We miss a lot of the American teenager’s pathos.

Hughes alleged that he owned the only existing copy of the film’s director’s cut. Now that he’s joined the choir invisible, what will become of it? If it still exists and his estate can find it, I propose that it be released immediately, with all its imperfections intact. I propose that any profits it generates be used to create a crisis hotline for teenagers, staffed by smart, funny, three-dimensional human beings with a compassion that leaps off of their scripts. (Emerson Dameron)