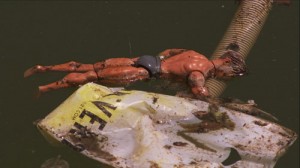 Leslie Cockburn’s “American Casino” is a gimlet-eyed look at speculation in U. S. financial markets after late 2000, when Congress enacted the Commodities Futures Modernization Act. Talking to both Wall Street refugees and people on “Main Street,” Cockburn (along with co-producer, co-writer Andrew Cockburn) captures the recklessness and fecklessness of the past decade’s fiduciary house of cards that led to the $12 trillion subprime-mortgage bust. “American Casino” (not related to the 2004 reality TV production), shot over the course of 2008, falls more in line with the best of “Frontline”-type reportage rather than more sensational styles of contemporary nonfiction, but its sensible focus on personalities of the greedy (often shown in shadow) and the those taken for a ride offers human dimension to a catastrophe that will likely never be fully explained nor fully understood. Cogent, sharp and infuriating, “American Casino” moves from the exploiters to the exploited, taking to the streets of Baltimore to find communities damaged by the venality and greed of distant strangers. 89m. (Ray Pride)