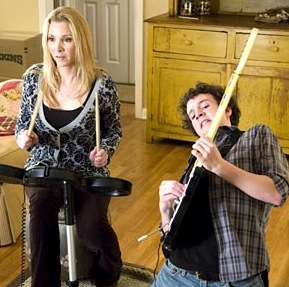 iends and grow up after overcoming the usual parental and interpersonal deficits. Adolescent describes the script by Josh A. Cagan and Todd Graff, who directs a post-adolescent cast by the book. Graff, also credited as “Screaming Teacher,” returns to the clichéd turf of “Camp,” his 2003 writing-directing debut about New York City teens at an upstate musical-theater summer camp—based on his experience as a counselor at same. Will (Gaelan Connell, an NYU film film student from the band Exist) flees Ohio with his mom (Lisa Kudrow) for a fresh start in New Jersey, where his new school makes a big deal over an annual rock-band competition. Will’s voiceovers of his eight emails to David Bowie supply a diary of this rock nerd’s dealings with brunette book nerd (Vanessa Hudgens from Disney Channel’s “High School Musical” franchise) and hot blonde cheerleader Charlotte (Aly Michalka). Sa5m tells Will “the five is silent,” and Charlotte’s last word on her silence about her past is “I don’t do ‘why’s.’” Will manages a band of oddballs he names “I Can’t Go On, I’ll Go On” that includes an underused cellist (Elvy Yost). Teen spirit triumphs over ostracism and insecurity, and the secret hurt behind a taunt that sounds like the nickname “Dewey.” With Scott Porter, Ryan Donawho, Charlie Saxton and a cameo by a great-godfatherly David Bowie. 111m. (Bill Stamets)