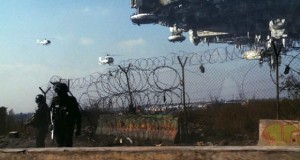 Twenty-eight marks the calendar for sci-fi action fare of our era. First came the three zombie films “28 Days,” “28 Days Later” and “28 Weeks Later” set in the U.K. Now we go to South Africa. Twenty-eight years ago a massive spacecraft came to a stationary hover above Johannesburg. Its alien occupants were relocated to a refugee camp called District 9 on the outskirts of the city. That’s the inspired setup for the first alien apartheid action film. Produced by Peter Jackson, “District 9” is based on a six-minute short from 2005 titled “Alive in Jo’burg.” Director Neill Blomkamp and co-writer Terri Tatchell efficiently sketch a history of escalating human-alien friction that precipitates a militarized operation by a global security corporation called Multi-National United (MNU) with Springbok insignia: relocate 1.8 million stateless, second-class “non-humans” to District 10, a new ghetto some 240 km. away. In charge is Wikus van der Merwe (Sharlto Copley), an Afrikaner bureaucrat from the Department of Alien Affairs and the son-in-law of MNU’s managing director. The story zips along by excerpting an in-house video starring Wikus (plus outtakes), surveillance video shot inside District 9 and MNU’s headquarters, security video in a fast-food joint, and live TV newscasts that borrow from real South African Broadcasting Corporation video. Other framing segments come from an investigative documentary made after the events in the film occurred. Interviewed there are Wikus’s wife, parents and co-workers, along with South African journalists and sociologists. There are also onscreen updates of the hours elapsed after Wikus is exposed to a cannister of fluid alien fuel that initiates his metamorphosis into a “prawn,” as white and black South Africans alike diss the bipeds who look like decapods. Wikus also transforms into an action figure who teams up with an alien for a daring foray into a MNU lab four stories underground. Wikus even dons an Iron Man-like suit to take on predatory Nigerian merchants and MNU commandos. Blomkamp punctuates “District 9” with the din of heavily metallic `da-thunks!’, demonizes merchants of death and ignores translation barriers in dialogue between humans and subtitled aliens who utter clicks like those heard in some eastern and southern African tongues. Key questions, though, are rightly left up in the air, such as why the aliens arrived and why they cannot leave. Besides a terrific premise, there’s an acidic undercurrent of satire that targets human rights protocol as well as anti-“prawn” zenophobia. Unlike “Transformers,” this is action for thinking fans. With David James, Vanessa Haywood, Louis Minnaar, Mandla Gaduka, and Jason Cope as a correspondent and model for the CGI aliens. 112m. (Bill Stamets)