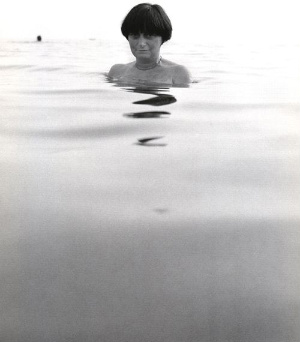 Agnès Varda, now 81, assembles a kaleidoscopic memory of her long life as a filmmaker in ” The Beaches Of Agnès” (Les plages d’ Agnès). Photographer, installation artist and widow of Jacques Demy are among Varda’s other facets revealed in this intense, heartening assemblage. Taking a similar tack as she had in her rich, recent “The Gleaners & I” (2000), Varda takes her small video camera across the world to revisit the places that meant to most to her, mostly near the sea, astride beaches. What others find disposable, this “little old lady, pleasantly plump,” admires and lingers near. The stuff of the everyday is spun into autobiographical joy: through at least half of this tender, playful film, the eyes water as if the memories were our very own. There are many astonishingly beautiful moments, which make up for the welter of information and Varda’s willingness to drift forward and back, eddying through her long, rich life. What other filmmaker has dressed up as a potato to promote an exhibit but also be decades-long friends with director Zalman King, of “Red Shoe Diaries” fame? She’s an old soul who remains impressively young. With Rasolie Varda, Mathieu Demy, Jim McBride, Harrison Ford, Jane Birkin and Chris Marker (depicted as his cartoon tabby alter ego, Guillaume-en-Egypte, with a distorted voice). 100m. (Ray Pride)

“The Beaches of Agnes” opens Friday at the Music Box.