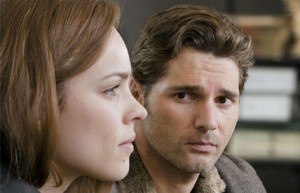 The 2003 novel by Hyde Parker Audrey Niffenegger is adapted here by screenwriter Bruce Joel Rubin, whose earlier “My Life” (1993) depicted another American male with absence issues. Henry (Eric Bana) is a research librarian at the Newberry Library. He has a genetic glitch. Epileptic-like spells cause his body to disintegrate and then reintegrate in another year at another location. His clothing stays behind, so he’s learned to pick locks and steal clothes until his unpredictable return trip. Bana transmogrifies less momentously than he did in “Hulk.” The question is not whether the world can be saved, but can his marriage to Clare (Rachel McAdams from “The Notebook” and “State of Play”) survive this incurable condition. As in “City of Angels” and “Meet Joe Black,” a male love interest is unavailable in a heartbreaking way that neither prayer nor therapy can alter. Still, “The Time Traveler’s Wife” is more akin to “The Curious Case of Benjamin Button” since its timeline spans the lifetime of a love. It begins with Clare as a little girl playing alone in a meadow where her future beau materializes au naturel. He asks her to steal some of her father’s old clothes, which these chums hide in the bushes for periodic visits over the years until the couple weds in an age-appropriate time frame. Is Henry’s time-traveling gene dominant or recessive? Will their offspring get marked absent in school too often to pass? Director Robert Schwentke (“Flightplan”), director of photography Florian Ballhaus (“Flightplan,” “The Devil Wears Prada”) and composer Mychael Danna (“Exotica,” “Kama Sutra”) package a classy entry for that shelf devoted to metaphysical romance. Being there may be overrated. With Arliss Howard, Ron Livingston, Stephen Tobolowsky and Hailey and Tatum McCann. 108m. (Bill Stamets)