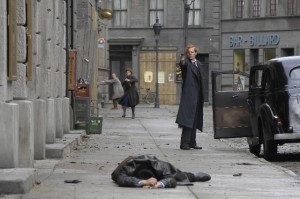 The Music Box and IFC offer canny  counter-programming to this week’s wide release of Quentin Tarantino’s “Inglourious Basterds,” a historical revenge fantasy about World War II resistance in a mythical France, by offering “Flame & Citron,” Ole Christian Madsen’s crisp, efficient thriller, based on fact, about resistance to the Nazi invaders in Denmark in 1944.

“When your nation is invaded you have to make very important decisions. What do you chose?” is Madsen’s simplest declaration of what his film is about. The themes are timeless and painfully timely: think Tehran. “Flame” and “Citron” were the code names for two resistance fighters, 23-year-old Bent (Thure Lindhardt) and 33-year-old Jørgen (Mads Mikkelsen, seen previously in “Pusher” and “Casino Royale”). Flame, with notably fiery hair, wants to launch armed counterattacks against the occupying forces. Citron, Flame’s driver, and a family man, becomes more and more involved in the clandestine activities. Things go wrong, loyalties are questioned, deeper moral issues are sketched in. The script’s psychological observation is acute and Madsen’s command of dynamic action filmmaking is gratifying.

With his fifth feature, he’s learned his lessons, and there’s a strong parallel to Jean-Pierre Melville’s masterpiece, “Army of Shadows.” Madsen achieves something both concrete and tactile with his settings and costumes and casting, but also something beyond movie-ness, something simply dreamlike: a memory that foregrounds a minimal amount of details. There’s heightened reality in the highly accomplished action setpieces, but through blocking of characters’ movements and camera movement, there’s an extreme level of psychological suggestiveness. “Yeah. My first thoughts, when we started scheduling the film, as a shooting process, I was thinking, why a lot of times, why most of the time when you see a period piece or a historical film, why do you always feel like it’s many miles away from you?” Madsen asks when I get him on the phone. “It’s like you’re holding something in your hand and you outstretch your arm to look at it. I would try to find a way to move the characters and the film a bit closer to people. Two things I tried to do:  The film would be about these existential choices about what’s right and wrong, and what would you have done, that kind of stuff. The ‘righteous kill,’ or not. And I would like to work with the texture so it would be a kind of psychological dissection, a look at the person as well, instead of using all my energy getting the right kind of bricks, the right kind of windows. So yes, you could say the streets of Copenhagen become more like a room for these characters and less a naturalistic study of Copenhagen in 1944, yes, that is correct. That is deliberate. In Denmark, it had some criticism because people would like to have seen Copenhagen as it was in 1944 instead of seeing it through this story. The film opens with a letter he is writing, and though it has this flashback-flash-forward character, that is my excuse for this dreamlike state of mind he’s walking in.”

That’s a canny way to rationalize, or perhaps a better word would be, to justify that point-of-view. “You could say that, it is a rationalization as well. That way I could create an environment that didn’t look exactly the same, but had a feeling [of the time].”

Madsen is bemused that the American press notes lean heavily on the comparison to Melville’s ultimate man-of-honor/”righteous kill” parable, “Army of Shadows,” but most filmgoers have only discovered that film since its first U.S. release a couple of years ago to deserved acclaim. While Fassbinder’s “Berlin Alexanderplatz” sketched street life in similar fashion to “Flame & Citron,” Madsen is more of a Melvillean. “I don’t like comparisons very much, and I didn’t see ‘Army of Shadows’ until about five months before I started shooting ‘Flame & Citron.’ So it wasn’t like much that it was inspiration, it more like… When I saw it, I was glad, because I didn’t want to go too close, because it’s a great film. But it was a confirmation you could actually use a lot of the rituals and the mechanisms around the Resistance. The whole [reality] of the Resistance is almost one long ritual. Small actions, mechanisms. Almost no meaningful dialogue. It’s very, very strict in that sense. I would have liked the first half of ‘Flame & Citron’ to look like that, so it was confirmation. [“Army of Shadows” is] probably the best Resistance film ever made.”

Flame and Citron embody professionalism in the face of chaos. It is a gangster movie. Philosophically, they’re anti-criminals, committing crimes. “We started researching this film in 1999. In those days no one was interested in financing or developing the film so we had to keep on researching. In 2005, it changed because of the German films showing their side of the Occupation. It was quite amazing for me to realize—it became clear that a lot of the rationalization around ‘why we would kill collaborators and Danish Nazis,’ a lot of the self-consciousness about it is created afterwards. When I spoke to the few survivors of the very special unit Flame and Citron were in, who saw themselves as intelligence more than freedom fighters, they were like, ‘we decided who to shoot, we didn’t take orders, we took our own goals for a hit.’ That overwhelmed me a bit. Wow, this could really go wrong. They shot a lot that wasn’t the right people, but they shot a lot of the right people.”