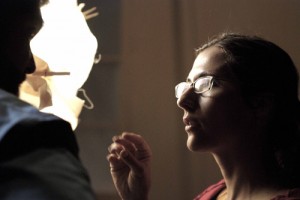 Eccentric without ever becoming unduly whimsical, Sophie Barthes’ surrealism-lite “Cold Souls” (which she tenders a co-film-by with cinematographer-partner-soul mate Andrij Parekh) pirouettes within the same school as Charlie Kaufman’s dance floor. Paul Giamatti plays blocked actor Paul Giamatti, who’s having agonies over his role in a production of Chekhov’s “Uncle Vanya,” much to the chagrin of his fellow actors, the play’s director Michael Tucker and wife Emily Watson. An article in the New Yorker leads Giamatti to one Dr. Flintstein (David Strathairn), who specializes in “soul storage” from an office on Roosevelt Island. There are clever, understated visual touches throughout—Giamatti’s journeys to-and-from on the red tram that rises above the river at 59th Street toward the soul storage unit suggests the confinement of consciousness inside the body; the final image is an alarmingly wistful going-out-of-focus shot that suggests a watercolor Rothko—even when the parallel tales of Giamatti’s tortures and a “mule” (Dina Korzun) who transports souls within herself for Russian soul-traffickers becomes a little complicated. The low-tech technology draws from 1960s-pop-style furnishings, as if from an Italian movie that in some kind of time warp was influenced by Michel Gondry forty years before his time. Still, Barthes has an idiosyncratic sensibility worth taking seriously; influences she cites include Jung and Woody Allen, for whom she briefly considering writing the script after waking from a dream with her central image of a chickpea-sized soul. (She also cites photographer of the ethereal Deborah Turbeville and painter of body-shorn-from-soul Francis Bacon.) There’s a strong underlying metaphor for the trafficking of bodies, especially of women, from former Soviet countries like Russia and Moldava but that stress will lie mostly in the viewer’s take on the tale. The dovetailing of Chekhov with contemporary Russian real-life drama is also dryly suggestive. “I don’t want to be happy,” Giamatti-Giamatti wails. “I just don’t want to suffer.” Later, it’s noted, “Soullessness has its own peculiarities.” And the most loaded line? “And how was Uncle Vanya?” The soul shrieks in silence. 101m. (Ray Pride)