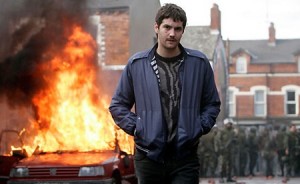 Kari Skogland’s “Fifty Dead Men Walking” is a thriller set in Belfast in 1980 during the pitched insurgent battles between British occupiers and the Irish Republican Army. Jim Sturgess plays a young con man recruited by intelligence agent Ben “Sir” Kingsley to get inside the IRA, with the expected increased danger to himself. The double life wears. The Canadian Skoglund makes unobjectionable work of the sectarian issues and the oft-shouty performances are mostly sound, especially from the charismatic Sturgess, and including “Sir”‘s wigtender, but not from Rose McGowan, as an IRA seductress with a risible accent. There may be a few too many explanatory titles as well.  With Kevin Zegers, Natalie Press. Based on Martin McGartland and Nicholas Davies’ book, “Fifty Dead Men Walking.” The title comes from the number of lives McGartland claims to have saved as an informant. 117m. (Ray Pride)