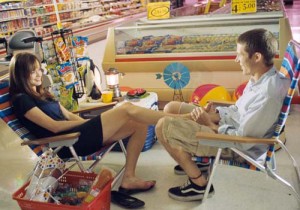 Beveled to edgelessness, this bland comedy of after-college careers centers on Ryden (Alexis Bledel, fine in both “The Sisterhood of the Traveling Pants” films) as a newly graduated English major hoping to land a job at the “best publishing house in Los Angeles.” But what about her platonic best pal Adam (Zach Gilford)? He writes gooey songs about her and puts off opening that letter from the law-school admissions office at Columbia University, the favorite East Coast institution of higher learning for screenwriters needing to create a rift for a couple. Landing no jobs, Ryden moves in with her lovably oddball family, and starts spending time with Rodrigo (David Santiago), the handsome Brazilian next door who sacrifices his career of directing TV ads for guacamole machines so he can move back home to his family. Ryden’s family is outfitted with mild quirks: her little brother Hunter (Bobby Coleman, so strong in “Martian Child”) gets in trouble at school for licking kids’ heads, and her grandma Maureen (Carol Burnett) keeps all her medication in a rotating, lit-up plexiglas display case. Michael Keaton is the doofus dad and Jane Lynch is the weirder mom who really ought to steal more scenes. Director Vicky Jenson and writer Kelly Fremon do little with these all-around reduced characters. As for the job market of recent months, “Post Grad” peddles neither escapism nor satire. With Mary Anne McGarry, Catherine Reitman, JK Simmons, Fred Armisen and Craig Robinson. 89m. (Bill Stamets)