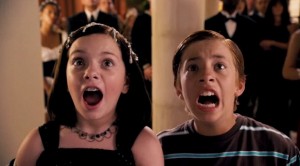 Kid-friendly father of five Robert Rodriguez puts his brood to work on another fantasy adventure set in suburban Texas. “Dream” won the word count in his script for “The Adventures of Sharkboy and Lavagirl 3-D” (2005), centered on a 10-year-old boy. “Wish” wins in “Shorts,” which centers on 11-year-old Toe Thompson (Jimmy Bennett, “Orphan”) and a rainbow-hued stone that tells him to make wishes. He does and gets new friends: a fun alien squadron of tiny sentient flying saucers. Adventures arise as the magic stone passes to other kids, adults, a crocodile, and a booger from the nose of Toe’s pal Nose Noseworthy (Jake Short). The boys live in Black Falls, a subdivision owned by Black Box Industries for housing its white-collar labor. Its star product is a black Blackberry-like device with Transformers-type options to mutate into “just about everything you would ever wish for,” as Mr. Carbon Black (James Spader) touts his Back Box, “the ultimate communication device.” Toe narrates out-of-sequence episodes numbered zero through five, using pause and fast-forward icons on the screen. “It’s very different,” overstates ambidextrous auteur Robert Rodriguez, who writes, directs, shoots, edits, supervises the visual effects, and scores this inoffensive family fare. “I wish I were in a Hollywood movie,” wishes one kid at the end, who settles for one made in Austin with zero to say about movies as wish-fulfillers. Most original detail: naming Mr. Black’s mean daughter “Helvetica” (Jolie Vanier). “Hel,” as her dad calls her, presents a science project on “Aggressive Behavior of Female Wasps.” With Jon Cryer, Leslie Mann, William H. Macy, Kat Dennings and Rebel Rodriguez. 108m. (Bill Stamets)