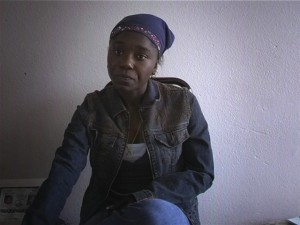 “South Main,” Kelly Parker’s documentary about the government-run relocation of three women, Latisha Fikes, Tajuana Green and Tena McConico, in South Central Los Angeles as their gang-ridden housing project is scheduled for demolition, is sober and assured, delineating the pressures each faces as they move to housing in mixed-income neighborhoods. Parker’s economic sense of framing, use of real time and unbroken takes are reminiscent of the work of the Portuguese director Pedro Costa. There’s a ten-minute monologue by one of her subjects that breaks the heart: violence and love and fear and language combust. On the film’s Web site, Parker cites as films she likes Barry Jenkins’ “Medicine for Melancholy,” Costa’s “Colossal Youth,” Ramin Bahrani’s “Chop Shop,” Charles Burnett’s “Killer Of Sheep,” Ken MacKenzie’s “The Exiles” and films by two listed as advisors, Jem Cohen’s “Chain” and Thom Andersen’s “Los Angeles Plays Itself.” I repeat the list at length only to say that she honors her forebears with “South Main.” Shocking and fierce as well as beautiful, “South Main” haunts. The sound design is stellar. 77m. (Ray Pride)