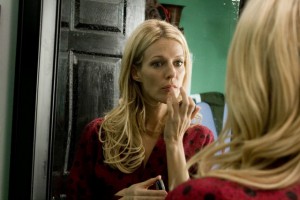 Or, “Dippy With A Chance of Acid Reflux.” Slamdance 2009 entry “Weather Girl,” writer-director Blayne Weaver’s low-budget romantic comedy, stars Tricia O’Kelley from the series “The New Adventures of Old Christine” as a perky 35-year-old Seattle TV forecaster, who comes into conflict with older boyfriend Mark Harmon over his dalliance with a co-worker. “Weather Girl” is best during the “Sassy Weather Girl”‘s  profane on-air meltdown, but is as cuddly as a cootie for the most part. It’s predictable stuff, with intermittently funny but usually forced dialogue like “You’re sexy in a foreign film kind of way, with the angles and the attitude.” Um, no. With Blair Underwood, Jane Lynch and Jon Cryer at his most cringe-inducing, but in a good way.  94m. (Ray Pride)