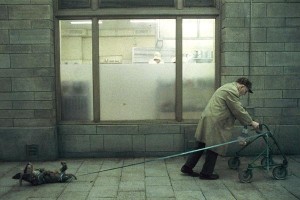 Swedish auteur Roy Andersson hasn’t made many movies, but the last two, as well as his commercials work, are doozies. “You, The Living” (Du Levande, 2007), is a dark comedy in the vein of his “Songs From The Second Floor” (2009) that looks like no other, and gets laughs and gasps like no other. A grand masterpiece of droll suffering, told in fifty droll, seeming disconnected sketches, each in an unbroken take, his performers dusted with unearthly powdery makeup, shot in a gray-to-green palette, “You, the Living” lives up to its characters’ resigned refrain, “Tomorrow is another day.” Of course it is: there’s more suffering to be had. Produced over a period of months on immaculately designed sets and shot with exquisite compositional elegance, Andersson has written that the film “is about the human being, about her greatness and her miserableness, her joy and sorry, her self-confidence and anxiety.” His despondent Stockholmers are the funniest, most moving sad sacks you’ll see in eons. Ingmar Bergman, himself a maker of commercials when young, said that Andersson’s are among the best in the world (the seven minutes at youtube.com/watch?v=7ofPRv29RMs makes a splendid taster of his style.) 95m. (Ray Pride)