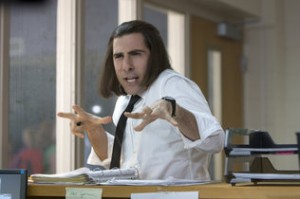 The only half-good thing I can find to say about this unwatchable time-waster is that someone designed an apt match between a name and a hairdo. Marc Pease (Jason Schwartzman)–I love that “c” in “Marc”–wears his hair long and permed like a Renaissance prince at a seventies prom. It’s an icky package. Marc is a delusional, arrested adolescent with plans grander than his means. No poignancy is felt in that gap. Eight years ago, this high-schooler with stage dreams fled act two of “The Wiz” in his Tin Man costume. Now dating Meg (Anna Kendrick), a senior at his alma mater, he drives a limo. He plans to sell his late grandmother’s condo so he can cut a demo with his a cappella octet that’s busted down to a quartet. He expects Mr. Gribble (Ben Stiller), his former drama teacher, to be his producer, since he once lied to his face about Marc’s talent and chances of success to get him out of his office. But when Marc listens to part of a tape labeled “Meg’s Singing,” Mr. Gribble sounds like he’s more than Meg’s vocal coach. Big things might happen when the curtain rises on the new production of “The Wiz.” Fans of Schwartzman and Stiller may recognize their faces and voices and facsimiles of their default comic personas, but fans of “Love Liza” (2002) will never guess that “The Marc Pease Experience” was directed by the same Todd Louiso, the actor who then made his directing debut with Philip Seymour Hoffman playing a gasoline-fumes-sniffer. For his second feature, co-written with Jacob Koskoff, Louiso coaches no actorly output whatsoever. From huffer to hoofer, he trips and falls badly. It’s amazing, although in this case uninteresting, to see so many things to go wrong in one film. With Jay Paulson, Zachary Booth, Ebon Moss-Bachrach and Gabrielle Dennis. 84m. (Bill Stamets)