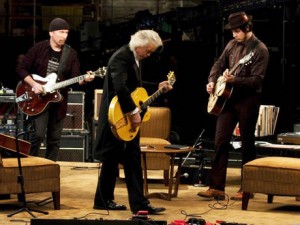 Director Davis Guggenheim gave Al Gore a platform to teach the world about global warming in “An Inconvenient Truth” (2006.) Now he gives three electric guitarists a venue for discoursing on their artistry: associate producer Jimmy Page (Led Zeppelin), The Edge (U2) and Jack White (Raconteurs, The White Stripes). Their insightful bios–light on sex, drugs and tax brackets–contextualize their musical backgrounds in U.S. and U.K. pop culture. But this always watchable (and just as listenable) documentary looks at each musician apart from his respective bandmates. We get sit-down sessions between the three guitarists. Guggenheim art-directs these scenes as an apt homage to the finale of Martin Scorsese’s “The Last Waltz” (1978). On a dark, vast studio set, the audience is only crew members standing at the periphery. Page, The Edge and White are great–maybe in more ways than fans can discern from their solos in concerts and recordings. About to meet his elders, White confides to the camera his intent to “trick them into teaching me all their tricks.” A tad affected in his derby, bow tie and vest, White supplies “It Might Get Loud” with a lovely opening trick of his own: in a Tennessee field, he builds a one-string electric guitar from scratch and rocks some nearby dairy cows. 98m. (Bill Stamets)