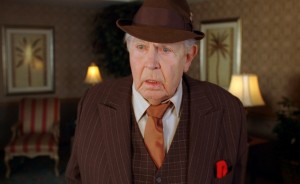 Another one of those bad films that is so bad, it’s only good for allowing dispirited filmmakers to persist. In America, anything can get distributed, apparently. What a country. First-time writer and director Marc Fienberg draws upon dating forays with his 89-year-old grandfather in Chicago to make what cannot even pass for a second-rate TV pilot. Twenty-eight-year-old David (Paul Campbell) bailed on a masters degree in healthcare to sell cars so he could put his grandpa Joe (Andy Griffith) in a nice old folks home. David coaches Joe on bagging old chicks. In an unoriginal turnaround, the newly randy Joe turns David into a sensitive, caring human being who now cares about women as human beings. Not only does he quit his soulless sales job, he starts using Joe’s slang–“oh, applesauce!,” “you’re the bees knees” and “horsefeathers!”–and goes back for that degree. Bonus dividend: he gets the girl Julie (Marla Sokoloff), who has a turnaround of her own tucked into her sports bra. Only fans of oral sex between octogenarians will score any pleasure in this inept, annoying comedy. With Doris Roberts, Clint Howard, Geoffrey Owens, Juliette Jeffers and Liz Sheridan. 105m. (Bill Stamets)