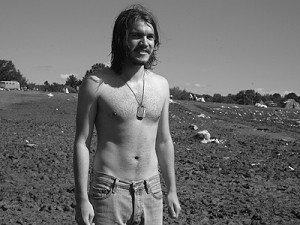 Director Ang Lee trips lightly for gentle comedy on upstate New York counterculture. In 1969 the poster read: “Woodstock Music & Art Fair presents An Aquarian Exposition in White Lake, N.Y.; 3 Days of Peace & Music.” Longtime Ang collaborator James Shamus adapts the 2007 memoir “Taking Woodstock: A True Story of a Riot, A Concert, and A Life” by Elliot Tiber (with Tom Monte). The screenplay makes passing though telling mention of the Stonewall Inn riot and does not follow Tiber’s life after the so-called Woodstock Nation decamped. While Robert Altman could have made an ensemble docudrama about this communal, collective fest, Lee and Shamus center on Elliot Tiber (comedian Demetri Martin), a boyish tourism booster who offers his summer festival permit to Woodstock’s organizers. Elliot, a struggling painter and interior designer in Greenwich Village, is spending his summer back in the Catskills helping his Russian immigrant parents run their shabby roadside motel. The heart of the film, with low-key and farflung beats, is Elliot’s coming out. His mother Sonia (Imelda Staunton) comes out too when her son and husband Jake (Henry Goodman) find a stash of $97,000 in her literal closet. All that horded cash was her psychic buttress against scarcity and persecution. It takes an act of parental rebellion for Elliot to break away from the motel, overrun as a base of operations, to hike over hill and dale to see the field where a half million assembled for the concerts. LSD and hash brownies let the son and his parents, respectively, partake of the Aquarian consciousness. Their reconciliation, thankfully, is not framed as a microcosm of inter-generational healing.  Eugene Levy stands out in a minor role as Max Yasgur, his first in too few where he’s more than a self-caricature. In concert with Lee’s love of detail, cinematographer Eric Gautier (“Into the Wild,” “The Motorcycle Diaries”) frames a historic panorama with hand-tooled incident, without channeling the zooms and other outdated techniques of his late sixties counterparts. With Dan Fogler, Jonathan Groff, Jeffrey Dean Morgan, Liev Schreiber and Emile Hirsch. 120m. (Bill Stamets)