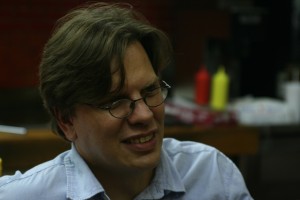 Film festivals are retrenching around the world as economies contract and sponsorships dwindle. The Chicago Underground Film Festival’s 2008 edition ran in late October, just as the financial crisis began, at a venue that was difficult to get to by public transportation, during an Indian summer heat wave, opening on the closing night of Chicago International, which also was the night of Barack Obama’s primetime infomercial, just a week before the election. The results were disappointing. But a move to September this year, at the Loop-located Siskel Film Center promises better things. Festival director Bryan Wendorf is optimistic. “The economy didn’t really impact the number of films submitted. The quality, as always, ran the gamut from awful to brilliant but there was plenty to look at and choose from.”

Trends emerge during programming. “I never look to program around a predetermined theme, but once the films and videos are chosen patterns emerge,” Wendorf says. “This year there seems to be a lot of work dealing with ideas about place, home and globalization. Some of the work, like Lucy Raven’s experimental documentary ‘China Town’ deals with this in a very conscious and direct way while other works address these issues from more oblique angles.” Another trend is for work on digital video to exploit its own textures rather than pretending it’s the same as film. “Video is almost infinitely malleable. But the festival has never set out to be a ‘new media’ showcase and we are still seeing great work on 16mm and 35mm.”

As for their new locale, “The Siskel has been enthusiastic and hands-off, a perfect combination, leaving us alone with programming. Once they made the decision to work with us, they showed nothing but trust. The presentation at the Siskel is state-of-the-art and I can’t imagine these films looking better than they will this year.”

So what constitutes “underground” in the year 2009? “In the nineties, we were still approaching things from a grungy, post-punk ‘transgressive’ aesthetic, and while I still love many of those films I rarely see examples of that type of filmmaking being done today that I have much enthusiasm for. The programming this year has more subtlety and nuance. Although CUFF is a relatively small festival in terms of the number of films screened, within those programs is a huge variety. What these films will share is that they are made by filmmakers working out of a passion for ideas and art rather than as calling cards to Hollywood.” (Ray Pride)

[…] In a recent interview, CUFF’s Artistic Director, Bryan Wendorf stated that “programming this year has more subtlety and nuance,” which is readily apparent when one peruses the full festival lineup below. As far as features go, they run the gamut from longtime CUFF participant Todd Verow’s latest film, The Boy With the Sun in His Eyes, to experimental documentaries like Lucy Raven’s China Town to the recently restored 1968 psychedelic flick Gold to the political documentary American Radical. That runs a pretty wide gamut of cinema. […]