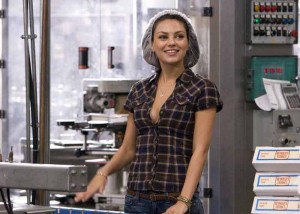 Mike Judge’s titles are pretty straightforward: “Office Space,” “Beavis and Butthead Do America,” “King of the Hill.” And his latest, the cheerily reprobate “Extract”? It’s his most basic yet. Even without its subplot of testicular endangerment, the writer-director distills all manner of dispirited maleness. Joel Reynold (Jason Bateman) wants to sell the business he’s built from the ground up, hoping to rekindle his relationship with his wife Suzie (Kristen Wiig) and get away from supervising a factory floor packed with numbskulls. Confiding in best friend Dean (a bewigged Ben Affleck), Joel hatches a drink-and-drug-influenced plot to prove Suzie’s fidelity… right about the same time as short-shortsed, sociopathic con-artist Cindy (Mila Kunis) shows up. Think: a Texas “Trouble in Paradise” meets “Idiocracy.” More drink, more drugs, more deadpan conflict.  And Marriage misunderstandings, neighbors who are proprietary bores, young men who don’t get older women, middle-aged longing for the “new” one: men reduced to their crude essence. While seriously deadpan, “Extract” has passages that play with social discomfort to the point of hilarious agony, such as the neighbor from hell you’d like to see drop dead, played by David Koechner. Judge’s pacing may not be to every taste, but there are more than a few great laughs in “Extract.” Plus that ear he has for weird dialogue: a distracted doofus after a kiss has been refused at lakeside in moonlight: “Look at all them mallards. I knew I should’ve brought the Mossberg.” While Wiig is underused, Judge does make ample note of her very shapely legs. With Beth Grant, a restrained J K Simmons and a loathsome lawyer embodied by a slit-eyed, dead-eyed Gene Simmons. 91m.  (Ray Pride)