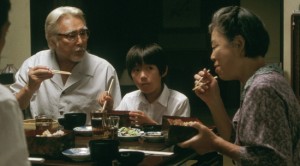 Relatively young Japanese master Hirokazu Kore-Eda remains the best successor to Ozu regularly showcased in the U.S. : a patient observer of Japanese family patterns, in  his own manner, the 47-year-old auteur still captures the fleeting, rare detail, the moment of behavior, the instant of communion or miscommunication in a family setting, that is both wry and affecting. In “Still Walking,” (Aruitemo aruitemo, 2008), Kore-Eda’s seventh feature from a roster than includes the kid-centric “Nobody Knows” and “After Life,” he elaborates on family dynamics with sculpted naturalism like few other directors as the Yokoyama family gathers to mourn  on the anniversary of a beloved son’s death on a single day fifteen years after. Comparison’s to Ozu’s 1953 “Tokyo Story” are apt: magic happens out of minutiae. Gestures indicate resentments that no longer simmer, but steep in a language of attention-inattention. It’s simple, heart-stopping, life-affirming stuff. With You, Hiroshi Abe, Yoshio Harada, Ryôga Hayashi, Haruko Kato, Kirin Kiki, Yui Natsukawa, Hotaru Nomoto, Kazuya Takahashi, Shohei Tanaka. 115m. (Ray Pride)